The Father The Son And The GAA

In this week’s Kildare Nationalist we featured Ardclough clubmen, Seamus and Piaras O Midheach, GAA men to the core.

Séamus Ó Mídheach is well known in GAA circles, not just for his role as Event Controller for Croke Park, a role he held from to 12 May 1980 until he officially retired on 23 December 2016 although he did some matches in 2017 including his 80th All Ireland. 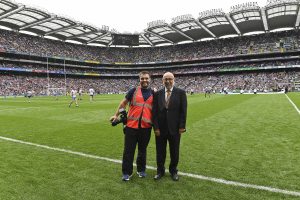 The appetite for Croke Park and Gaelic Games was sown for the young Ó Mídheach by his father, Billy, who was a compositor, originally in the Leinster Express and then in the Irish Press where he was employed for 30 years.

As a member of the Irish Printers Union (The Chapel) Séamus’s Dad managed to arrange meetings in time to meet his son off the bus and bring him to Croke Park. “As a young boy I always went to the Upper Cusack but as I got older, I went to the lower tier as the sun always shone there,” Séamus remembers.

The young Ó Mídheach went to the Patrician Brothers School in Tullow in Carlow where it was football every day from September followed by hurling every day in the second term. “My mother’s favourite player was Mick O’Connell but she did have a grá for Mick O’Dwyer when he came to Kildare,” Séamus laughs.

After a spell as Trainee Buyer in Switzers, where his boss, a Kilkenny man, spent most of his time talking hurling, Séamus started in Croke Park initially on the Commercial team before moving the role of Event Controller and Safety Officer as stadia in Ireland had to follow the health and safety regulations following some disasters in the UK and on the continent.

“I was also involved in the training of volunteers and I set up a Level 6 Fetac Course, initially in Killester College before moving to Portabello College and to other counties after that,” Ó Mídheach tells us. “We were criticised by some well known commentators for not allowing spectators onto the pitch but we had to follow the guidelines to prevent possible deaths.”

Séamus remembers his time in Croke Park with fondness with some historic occasions and some light hearted moments. “For the Kildare V Kerry All Ireland Final in ’98 both teams wanted the Canal End dressingroom so it was decided that there would be a toss between myself and Danny Lynch, the GAA PRO, a Kerryman. I won the toss even though the dressing room had been promised to Kerry. On the day the Kildare selectors got in early hung up the jerseys and closed the door. When Sean Walsh, the then Kerry Chairman, came knocking on the door to say “this is our dressingroom”, without turning Micko said “I don’t think so” and closed the door. That was the first victory for Kildare on the day,” he laughs.

The former Event Controller also looked back on historic occasions such as the Opening and Closing Ceremonies of the Special Olympics World Games in 2003 where he met Muhammad Ali and Nelson Mandela. “Garth Brooks was really down to earth when he came for his first concert, eating sandwiches with the lads at lunchtime while the first rugby and soccer matches in Croke Park were historic occasions. We had vets out to make sure the French didn’t bring a rooster to the ground,” he recalls.

Since his retirement Séamus Ó Mídheach has taken on the role of Chair of the Cultural and Scór Committee on Kildare County Board and therefore a role on the Kildare Management Committee. “We are promoting the Irish Language through the Joe McDonagh Foundation through which Ardclough and Sallins gained Bronze medals last year. I am hoping to attract other clubs this year perhaps for the Silver medals.”

Although he was a County Board delegate as a young man before his Croke Park role took over, Séamus has no plans for any higher office at this stage telling us that he will see out his current role before considering anything else.

Son Piaras is a well-known sports photographer with Sportsfile while daughter, Roisin, was a noted player with Ardclough. Her two daughters, Saoirse and Réaltín are involved at underage level there now. Hurling is his wife, Joan’s, favourite sport he reminds us.

Since retiring Seamus has taken up running. “I went back to my youth as running was my first sport as a boy and I won a number of Kildare Rural Medals.”   In 2010 he joined Celbridge Fit for Life, “a great organisation.” Through their encouragement he went from struggling to completing a 5K, followed by a 10K. Then it was on to 10 miles, a half marathon, a three quarters marathon and finally the Dublin marathon in 2019, after a hip operation. “I told no one other than Joan that I was going to do the marathon and she encouraged me all the way.”

There are many more marathons left in Séamus Ó Mídheach and Kildare GAA and the GAA in general are lucky to have his experience and expertise at the fingertips.

Ardclough clubman, Piaras Ó Mídheach, not surprisingly, always had an interest in sport and in media, particularly photography. A student of Scoil Ui Dhalaigh initially, followed by Colaiste Cois Life in Lucan he did a BA in Photography in Griffith College, a BA in Journalism and Visual Media as well as a sports writing course before joining Sportsfile in 2013.

It all started much younger for the young Piaras as he started playing hurling with Ardclough at the age of four or five before following that up with football with St Edwards (Ardclough/Sallins/Rathcoffey) and he would have acquired a great knowledge of GAA from an early age.

His love affair with sports and sports media/photography started through his ancestors from a long way off with his great grandfather, who owned a garage in Lucan, and this was followed by his grandfather, Billy, who worked in the Irish Press and his grandfather on his mother’s side, John Newcombe, who, although he worked in Guinness had an interest in newspapers and kept sending the young Piaras newspaper cuttings.

“My Dad obviously worked in Croke Park and he or my Mam brought me to matches there or to Kildare matches in St Conleth’s Park or around the country,” Piaras tells us. “I started taking photographs from a distance and then I started pestering my parents for a proper camera.”

“My pestering obviously paid off as I got my first camera, a Nikon D50 in 2006 from Birmingham Cameras. My Mam had done a lot of research on it including door stepping the late Adrian Melia, who was very good to me starting off.” Piaras adds.

Three days after getting his camera the now famous Sportsfile Photographer was taking his first pictures at a Kildare V Longford O’Byrne Cup game in St Conleth’s Park at the age of 15. “I took a lot of pictures that day and one of them obviously looked like a photograph as it was printed in the Liffey Champion,” he laughs.

Even though he was still at school Piaras started to get a lot of work which led to Editors ringing him during school hours leading to some hasty exits from classrooms to take calls.

The art of taking photographs has all changed now with the days long gone of having to develop film as colleagues Ray McManus and Brendan Moran had to do, to having runners pitchside to deliver pictures to instant technology nowadays.

Piaras’s match day starts several days in advance of the game with lots of research on players, personalities, who takes penalties, are the right or left handed or footed; who is coming back from injury or are the big player “matchups”. Despite this self-briefing the photographer must still be on his toes for the unexpected like the one he caught of Galway’s Joe Canning scoring the winning point in an All-Ireland semi-final or the point scored by his favourite player, Noel McGrath of Tipperary, in a Final after he had recovered from illness.

While Piaras Ó Mídheach might be considered to be a GAA specialist he also covers League of Ireland and UEFA assignments. While attending matches every weekend might be considered challenging for home or social life, Piaras says he long – time girlfriend, Niamh, understands his work and she and her family are very much into GAA also.

Normally at this time of year Piaras and his Sportsfile colleagues might have covered up to 16 or 18 counties but the Covid – 19 restrictions have put paid to that. The down time has allowed the team to update their files and of course to produce Book No 24 in the Season of Sundays which we featured on these pages last week.