Castlewarden’s Lauren Walsh continued her meteoric rise in the World Amateur Golf Ranking when she secured her second successive second-place finish this month according to Brian Keogh in GolfDigest.ie 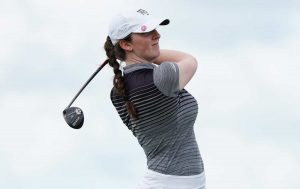 The world No 29, who now looks certain to burst into the world’s top 20, was runner-up in the Palmetto Intercollegiate at Turtle Point Golf Course on Kiawah Island.

Walsh finished in second for the second-consecutive event, just one stroke behind.

After opening with a 77 that left her tied 22nd, she shot a team-low 68 in the second round and level par in the final round to jump 20 spots up the board.

Walsh, who was seeking her third win on US soil in the space of four months, has two more events the next three weeks and could well crack the world’s top 10.