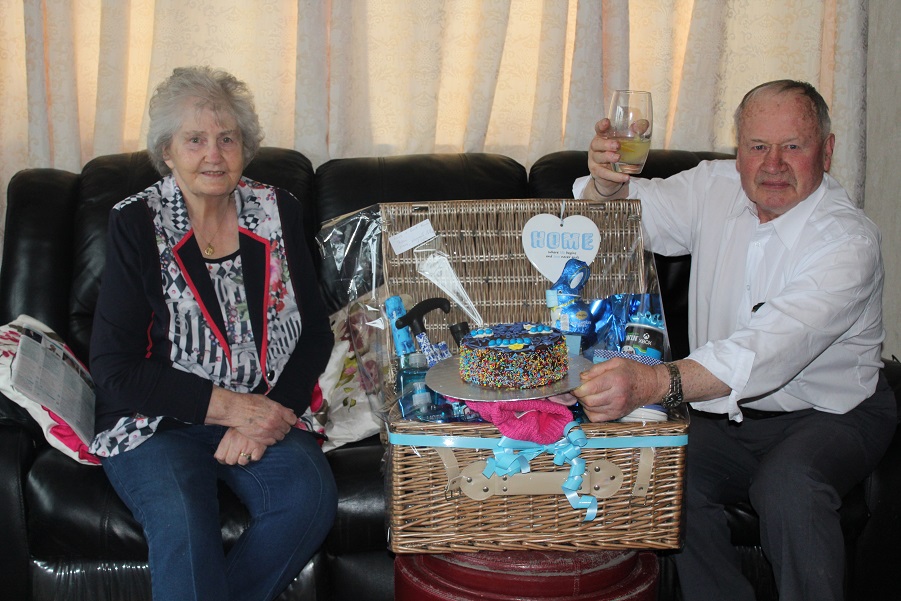 A couple from Ballinabarna, Kilmeade marked quite a momentous occasion on Friday 12 February – 65 years married!

Michael and Teresa Grufferty (pictured) had a great day for their wedding anniversary and their 12 loving children John, Mary, Eugene, Margaret, Esther, Vera, Bernie, Tommy, Michael Jnr, Anne-Marie, Dessie and Dominic, as well as their 37 grandchildren and 26 great-grandchildren, wished them many happy returns.

Mary (Grufferty Flood) explained that her parents “had an absolute fantastic day, absolutely” which “started off with Clem Ryan interviewing them on the radio at 10.45”. The neighbours called with flowers and “my sister Vera arrived with a four-course meal from Lennons in Carlow and their granddaughter Iona who works in the Clanard Court dressed up as a waitress from the Clanard Court and served them their meal at five o’clock.”

Community garda Sean O’Mahony, well known for contributing a song or three to events around the area, Patricia Berry of Athy Town Promoters and Jim Fitzpatrick were also on-hand, while “Mary Fennin from the Clanard Court delivered a Valentine hamper to them.”

It certainly sounds like a fantastic day was had!

Mary explained that her parents met at a picture house on Offaly Street in Athy and they were married in St Ita’s Church in Kilmeade on Sunday 12 February 1956.

She added that they had a dairy farm and grew beet, corn and turnips, grew all their own vegetables, so they were “reared with the best of food.”

Mary said that her dad used to play football, was involved in the drama society, read in the church and worked with KARE “all through the years. So he was very sociable,” she said. “Mam was at home rearing all the children and like they were wonderful parents… there was peace always in the home.”

65 years of marriage is no mean feat and Mary remarked that they “absolutely really love one another.”

Alongside Clem Ryan, Mary thanked all her brothers and sisters and the neighbours “for being so kind and generous… we had an absolute wonderful day even though we all couldn’t be together at the one time.”

Kildare households could save €2,000 annually on energy