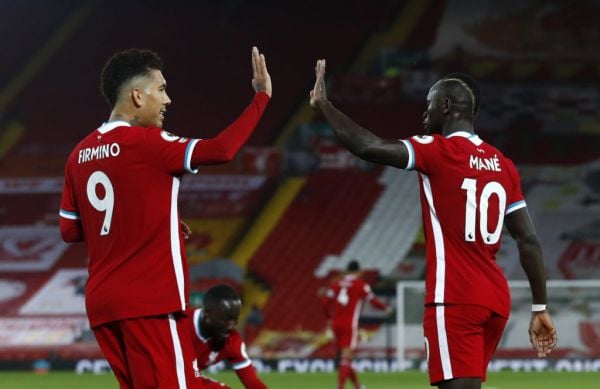 Liverpool’s Sadio Mane has sprung to the defence of fellow forward Roberto Firmino.

As the form of Jurgen Klopp’s side has fallen away in 2021, the Brazil international has come in for criticism due to his lack of goals, having scored just once since Christmas.

But Mane – whose own goal tally of 11 from 32 appearances is five short at the same stage last season – believes without the hard-pressing forward, he and Mohamed Salah would get fewer chances.

“He deserves more credit than me and Mo, for sure,” Mane told ESPN Brazil.

“But it is part of football, (people) always seeing the goals scored. But without Bobby, I don’t see me and Mo score as many goals as we have, to be honest.

“He makes everything easier for us.

“Brazil are just lucky to have Firmino. I have always said to Bobby: ‘You will have to change your nationality and come to Senegal’.

“For me, that would be a dream. I just love him. I think he is my favourite team-mate.”

Liverpool’s established front three could finally have some competition again as, the PA news agency understands, Diogo Jota is set to return to full training on Wednesday.

The Portugal international scored eight goals in his last 11 matches for the club before a knee injury in their Champions League dead rubber against Midtjylland in early December sidelined him for almost three months.

However, having made tentative steps with individual outdoor training Jota – who has scored a total of nine in 17 since arriving from Wolves in September – is ready to rejoin his team-mates.

There has still been no news on the outcome of scans on captain Jordan Henderson’s groin problem which forced him off in Saturday’s Merseyside derby defeat at home to Everton amid fears the injury could keep the midfielder out for an extended period of time.