Paul Robinson (1500m) of St Coca’s AC and John Fitzsimons (800m) of Kildare AC have both been selected on a 24 person Irish team for the European Indoors Championship in Touran, Poland on the 5, 6, and 7 March. 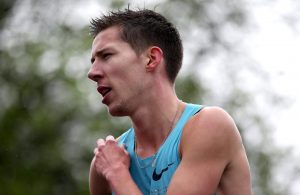 Robinson, the Irish 1500m National Outdoors Champion, who is coached by Sonia O’Sullivan’s husband, Nic Bideau, has been in scintillating form on the continent over the last few weeks and reached the European qualifying standard early on.

Fitzsimons, who is featured in this week’s Kildare Nationalist, has made an outstanding return to form after missing most of 2020 with an Achilles problem, reaching the qualifying standard when finishing third in that Irish Life Health Elite Micro Meet in the National Indoor Arena on Saturday.

Commenting on the team selection Athletics Ireland High Performance Director Paul McNamara said, “It has been a remarkable indoor season so far in 2021, for many reasons, and this is reflected in both the size and quality of the team travelling to Poland.  Despite higher qualification standards and fewer opportunities to compete, Irish athletes nailed their opportunity when it presented itself, most notably this past weekend at the Irish Life Health Elite Micro-Meet, and we now have an unprecedented 24 athletes who have earned selection for the 2021 European Athletics Indoor Championships, with many more who have posted qualification standards missing out due to the 3-athlete-per-event limit”.