Full GAA Games Programme Can Be Completed If May Start – Horan

GAA President John Horan remains confident that the full games programme can be completed if intercounty games start in May. 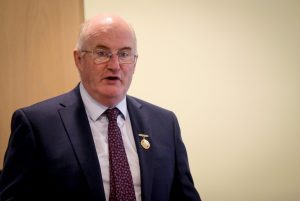 Last night’s speech from Taoiseach Mícheal Martin dashed any hopes of a return to group training for inter-county players in March but did offer some light at the end of the tunnel. If the country returns to Level 4 after Easter on 5 April then players will allowed to train with their counties from then.

Allowing for a four week pre-season, that would be mean games would return in early May and speaking on the Claire Byrne Show on RTE Radio 1 this morning, Horan said he confident that would allow time to complete the National League season, a full club Championship programme and then the intercounty Championships.

“We didn’t get a surprise yesterday,” confirmed Horan.

“In fairness to Minister Jack Chambers, when we discussed matters with him over two weeks ago he indicated to us that that was the likely outcome. We called our Covid committee together and that’s why we issued a press release to the membership to say that 5 April was the next most likely date for a change in sport in the country and that’s when we felt we’d be coming back.

“We’re confident that we can get a full games programme into that timeframe. You saw last year, we were very flexible with how we got it through but we got a full club programme, we completed the leagues and got the intercounty season played. If we got going in May, when in comparison to last year it was the end of July that we actually got started, I’d be confident that we will get a games programme in place and that we will get all the activities completed.

“This year’s plan for the league is a scaled back version, divisions are split into two groups of four so there are three games, a semi-final and final. The total number of games there is five, as opposed to eight normally, so that’s three weeks saved there. We’ll have that extra time period there from May to July that we didn’t have last year so I’m quite confident that the time will be there to do the National League, a full club programme and the intercounty Championship,” said Horan, who will complete his term in office and hand over the chains of office to Larry McCarthy after this weekend’s virtual Congress.

Horan also spoke on the matter of when underage players might be able to return to training. With some students due to return to school on 1 March, some had hoped that juveniles may be allowed to return to the training pitch during that month but Horan said that was unrealistic and instead offered that date of 5 April as a more likely time for when youngsters around the county can pull on their boots and join in with their team-mates once more.

“We’d be really pleased if we could get the juveniles back but I think you’ve got to look at it in it’s context . The government are only bringing back schools in a staggered manner and it’s only 300,000 returning, then the next phase is on 15 March. They want to get that right and they want to assess the actual impact of that return, in society and on the virus. I can understand where they are coming from. We’ve made strong representation that we felt confident that could bring the juveniles back and that we could do it safely. We did it before Christmas, with Level 5. The numbers that we had coming back there was considerable. 145,000 young people did our Whatsapp Return to Play questionaire in that time. That would be a large movement of people if that did come back and I think the government have taken that into account. We’d love to have the juveniles back, and I’m a parent of two kids, one in college and one in school, and I can see the impact. I would be delighted to see them being able to engage in their sporting activity, but look, we have to work within the guidelines that the government lay out and NPHET have looked at this. I would be hopeful that come the fifth (5 April) if we get the inter-county back that we’ll also get the juveniles back and that schools will be in full operation at that point,” said Horan.