No on-field GAA activity – even at inter county level – until Easter at the earliest.

FOLLOWING yesterday evening’s publication by the Government of their “Covid 19: Resilience and Recovery 2021 Plan”, the President of the GAA, John Horan and Director General, Tom Ryan, have today written to Co Boards advising them that there was “no immediate change for sport outlined in the plan” and that it was “clear that no on-field activity will be permitted – even at inter county level – until Easter at the earliest.” 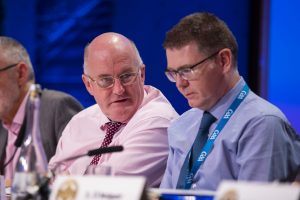 The President and Director General further told Co Boards that they will be “seeking clarity on certain aspects of the provisions on sport in the new Government document.”

“While the document does envisage the return of inter-county games at Level 4 and of some club games in Level 3,” the letter adds, “it remains impossible to plan a revised Master Fixtures calendar for 2021, as there is no indication at this point of when these Levels may kick in. The exercise is further complicated by the need to align our plans with whatever is permitted by the NI Executive for Counties
and clubs in that jurisdiction.”

Horan and Ryan further advised Co Boards, “In the interim, and despite any speculation you may read or hear to the contrary, we would again reiterate that the GAA have not decided on what competitions may or may not be facilitated in any revised national fixture programme for 2021. Such decisions will be a factor of how much time is ultimately available to us, both for an inter county season and for the broader participation levels that will be necessary for a meaningful club season at both adult and underage levels.”

“The next signpost on the road for society is likely to come in the week leading up to Easter. We will again communicate directly with Counties and Clubs at that point and once Government make clear whether they see any further relaxing of restrictions (for example allowing inter-county training or games) being permitted.”

Concluding their letter the President and Director General said, “We also want to assure you that we will publish a revised National Fixtures calendar at the earliest possible opportunity. We thank you again for your patience and understanding of a very trying situation and we look forward with optimism to the resumption of GAA activities at all levels later in the year.”