Beirne And Connors On Irish Team To Face Italy

Thursday, February 25, 2021
KILDARE will be represented on the double on the Irish team to face Italy in Round 3 of the 2021 Guinness Six Nations Championship in the Stadio Olimpico, Rome on Saturday. 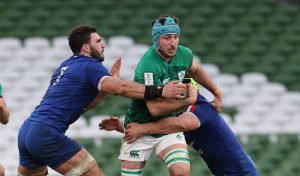 Will Connors in action against France in Round 2 of the Six Nations Championship Photo: INPHO/Billy Stickland

Head Coach, Andy Farrell, has made seven changes to the side that started against France in Round 2 in the Aviva two weeks ago.

Eadestown’s Tadgh Beirne, who played in the second row for the first two rounds, shifts to the backrow filling the blindside role, while Donadea’s Will Connors, who came on as a replacement for both the Welsh and French games, starts at openside with CJ Stander at No.8.