In this week’s Kildare Nationalist Sport we carry a feature on Noelle Earley, the former All Star, Dual Player and All Ireland winner with Kildare.

SANTA Clause was very good to Noelle Earley this year bringing a baby boy, Matty (Matthew) on Christmas morning to her and her husband, Johnny King, a native of Castlegar in Galway whom she met while in Australia. 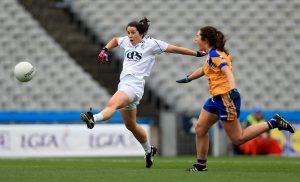 Playing county camogie from the age of 15 and football since 2002 Noelle will be forever remembered for her great goal in the All Ireland Final of 2016. She is quick, however, to deflect the praise elsewhere. “In fairness, Eadaoin Connolly did all the hard work and it was some run through the middle by her. She just laid it off to me and if I hadn’t scored, I don’t know what would have happened,” she modestly recalls. “Mary Hulgraine made some great saves on the day also.”

The former All Star didn’t find playing both hurling and football too difficult particularly in 2016 although she can understand the frustrations over fixtures by players from the likes of Cork and Tipperary.

“There was a good relationship between both management teams in 2016 and good communication also but overall, as a dual player, you probably do lose out a bit as you can’t give 100% to either game. Most of our training sessions were on the same night, usually in Hawkfield, so I could go to either and maybe go half and half and so make an appearance at both. I don’t see why both Associations cannot sit down and map out their fixtures and maybe go for alternate weeks” Noelle says.

“Maybe if Alan Barry had stayed on a bit of momentum could have been built for 2017. “I think five or six of the players retired after 2016 and maybe the likes of Ais Holton and I might have stayed on for 2017. I tried to play camogie that year but had to step away because of a knee injury, the progress of 2016 didn’t continue which was disappointing.”

A trip to Australia in 2010 with county colleagues, Stacey Cannon and Gillian Behan, was postponed because of the illness to her Dad, Dermot Senior.  “I also opted out from Kildare then as I didn’t really feel like playing and I wanted to spend time with Dad. I’m glad I stayed as he passed away six months later which was a difficult time for all of us,” Noelle tells us.

The goalscoring hero did make the trip to Sydney in 2012 and played football and camogie with the Cormac McAnallen GAA club and met future husband, Johnny, who was the hurling manager at the club.

The youngest member of the Earley family tells us about growing up. “Football and the GAA were all we ever knew.  All we did at the weekends was go to football matches in Roscommon or hurling matches in Tipperary.”

“When we came back from America, I was only seven so it was straight into the underage with Sarsfields. The six of us were all doing sport growing up, always active and we’d try our hand at anything. There was always someone to play with,” Noelle laughs.

“Dad was always there for the quiet word and bit of advice depending on whether you were playing for the club or the county. He’d tell us to do our best, always play the ball to someone in a better position and it was all about the team rather than the individual,” she explains.

Noelle pays tribute to her Mam, Mary, who is thankfully at home again and recovering well after an illness. “With Dad away so much with overseas trips or managing Roscommon or Kildare, Mam was the warrior, the leader of the pack. She held the house together bringing us to matches or training or school activities and moving to New York with the six of us. I’m wondering how she coped and I only have an eight-week-old,” she laughs.

The knee injury may have curtailed her intercounty career but Noelle continued to play for Sarsfields, up to the time of her pregnancy. “I really enjoyed it and we had a bit of success in 2015 although we lost out to Eadestown last year. There is a great bunch of players there and some good ones coming through. I hope the county team can also build on last year for 2021,” she continues.

A Senior Scientist Noelle Earley says she was lucky to have been able to work during the Covid – 19 pandemic “I hope to return to work at the end of the year. We miss sport too, the championship gave everyone such a lift last year.”

What about playing again? “Actually, Dave Price, the new Sarsfields Manager, has been asking about my plans. I won’t be doing anything for another few weeks anyhow,” Noelle laughs again.

“I did a bit with our minors and we won Division 2 of the Championship and I enjoyed it but I’d prefer to be a selector. For time being  I still think I can give a bit on the pitch myself,” she concludes enthusiastically.