MJ Smith Hoping To Repeat The Successes Of 2016

MJ Smith is back for a second spell as Kildare LGFA Chairperson and we carry an interview with the Carbury clubman in this week’s Kildare Nationalist Sport.

MJ SMITH, the man who was at the helm during the successes of the Kildare U14 and Intermediate LGFA teams in 2016, has returned for a second spell as Chairperson of Kildare LGFA and everyone associated with the ladies’ game is hoping he can weave his magical spell again although the Carbury clubman is quick to deflect praise to others for any success that might come the Lilywhite way. 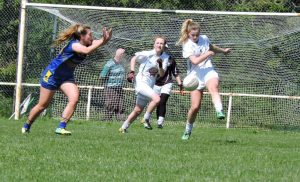 As well as his role with the county, Smith is still heavily involved with ladies’ football in Carbury along with Tom Sullivan and Jimmy Kelly yet he still finds time to tog out for his club’s Junior C team. “I’m still enjoying it,” MJ told us this week.

Smith’s involvement with the administrative side of ladies’ football started over 13 years ago when then Chairperson, Christy Horan, invited him to sit on the Disciplinary Committee. He was Assistant Chairperson to the likes of Deirdre Kearney, Joe O’Donoghue and Arthur Corrigan before assuming the main role for the first time in 2016.

MJ believes the All-Ireland Intermediate success of 2016 “helped to raise the profile of LGFA throughout Kildare. It put us on the map and everyone got behind the team. We may not have capitalised on the success at the time but we have learned from our mistakes and we are looking to improve all the time. We are now making massive strides on and off the pitch.”

Praising his Executive team, the Chairperson says, “the work they do is behind the scenes, and may go unnoticed, but it’s unbelievable and the enthusiasm and commitment of everyone involved is brilliant.”

Warming further to the topic Smith added, “We have excellent people on the sideline like Danial Moynihan, Terry Boyle, Pat Travers and Sean Reynolds, who are driving ladies’ football in Kildare. We have Michelle Wyse as Secretary and the work she does is unbelievable. We also have Sinead Brereton, Mag O’Neill, Donal Fitzpatrick, Karrie Grant and the new Assistant Chairperson this year, Richard Brophy from Kill, has already made his mark.”

According to MJ it was thanks to their Fixtures Committee, who provided Plan A, Plan B as well as Plans C, D, E and F, that their club competitions were, in the main, completed despite the various lockdowns although there was disappointment that the minor competition could not be completed because of the restrictions.

Normally at this time of the year Kildare LGFA would be involved in the National League and the clubs would be preparing for their Leagues but Government restrictions has put paid to both.

At club level in the county MJ Smith is very pleased that playing numbers are growing substantially to the stage where some clubs are now in a position to field a second team. He sees the age profile of LGFA players averaging in the 17 to 27 age group but he sees too that the LGFA initiative of Gaelic for Mothers as a huge success throughout the county with the numbers growing massively and everyone kept interested in the game.

Fixture clashes and finance are always a challenge but the Carbury man is full of praise for their sponsors, Bradys Family Ham and he says the relationship with camogie in the county is very healthy. “Last year we sat down on our fixtures and it worked out brilliantly and on the night of the Government announcement that intercounty football would not be returning at the end of February/beginning of March we were sitting down again to agree this year’s fixtures.”

What about hopes for his second term as Chairperson? “It wasn’t in my plans at the start of year to become Kildare LGFA Chairperson but we had no volunteers at AGM so we went to an EGM. My main goals would be to make sure that all girls from ages 6/7/8 all the way through to Gaelic for Mothers are provided football in a safe manner and that the enjoyment is there for them which is something we tend to forget,” MJ Smith concludes.