In this week’s Kildare Nationalist Sport we continue our series “Heroes of the Past” when Richard Commins looks at the life and times of Bill “Squires” Gannon of Round Towers and Kildare, the first man to lift the Sam Maguire Cup. 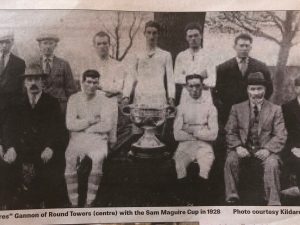 Bill “Squires” Gannon (centre) with the Sam Maguire Cup from 1928

BILL “Squires” Gannon had no reason to be modest but that’s the most common trait by which he tends to be remembered.

He had no reason to be so. He will always be known as the first man to lift the Sam Maguire Cup and it looks like he’ll remain the last Kildare man to do so in a white jersey* for a good while yet. That’s before we get onto his achievements in club football with Round Towers/Kildare.

He’s had a stand in his local GAA ground, a trophy, a bar and even a racehorse named after him and a sculpture will be unveiled in his honour in his hometown this year. All of which would probably have mortified the man who passed on in 1967.

Born in Newbridge around 1904 (records differ but his family say he was 63 when he died) but associated with Kildare Town having lived there with his grandparents from the age of 10, Gannon’s sense of timing was impeccable. His career coincided nicely with a golden age of both club and county. He earned it all, though, and was as hard-working and humble off the pitch as he was on it.

A farm worker and later a county council worker, he always worked the morning of a game and when he brought Sam back to the town in 1928, he headed off that evening to milk fourteen cows (although that number increases depending on the storyteller). As a teetotaller he had earlier passed Sam on to Joe Curtis of Naas to take the first drink from the trophy but he in turn is said to have allowed Charlie Purcell, a supporter from the county town to have the honour.

You can imagine the celebrations if Kildare ever did bring Sam home again.

1998 would give you a sense of it. But back in 1928 things were simpler. John Donnelly, the former Ellistown great, once told in an interview with this newspaper that Squires and Jack Hayes were handed their All-Ireland medals by a club delegate at Graham’s Corner in Kildare town on his way home from a County Board meeting.

The trophy wasn’t kept in the family home after it came home. According to Catherine Gannon, interviewed in 2011 for the GAA’s excellent “Oral History” project, her mother’s busy house drew a constant stream of visitors, whether they were using it to store their bicycles on the way to work or to sample her Irish stew. Things would tend to “go missing” from the house, unfortunately, so it was deemed safer to leave the trophy in the window of Graham’s Bakery.

Gannon’s modesty shines through in that interview. He didn’t talk much about his football career, nor did his daughter know about his involvement in the battle for independence.

“I came out of the chapel that day (of his funeral) and I saw the army guard of honour and I said to myself what’s going on? And they fired three volleys over his grave. I never knew ‘til then. That’ll tell you how modest he was. My mam told me then about his involvement in the IRA.”

Not only was Gannon a modest man but one thoroughly immersed in his community. Catherine also tells of Bill, an employee himself, giving work to many 14-year-olds when they left school. He was heavily involved in St. Brigid’s C.Y.M.S. and a key driving force behind the opening of St. Brigid’s Park, the local GAA ground. The superb main stand was later named in his honour.

Bill first came to prominence when the Kildare club reached the county final of 1924, losing out to a powerful Naas side in a replay, but it was the decider of 1927 that set him on the road to lifting Sam. Kildare secured their first senior title with a 2-6 to 1-5 win over Athy and that afforded Squires the honour of captaining the county team in 1928.

Gannon had made his inter-county debut at midfield against Laois in 1924 and played over 40 times for the Flourbags, his last start coming in the 1929 All-Ireland Final against Kerry, although he was on the bench for the 1931 final. He played in five finals in all including the 1926 replay, earning winners’ medals in 1927 and 1928 along with club colleagues Martin Walsh, Jack Hayes, Bill Mangan and Paul Doyle. He played in four of the six Leinster finals won between 1926 and 1931.

He was a big man, well over 6 foot, but quick with it and in his first few years on the panel he played as a forward more often than not. Indeed, he graced all lines of the field in over 40 games in the Kildare jersey, other than goalkeeper.

In his first All-Ireland final in 1926, Gannon played full-forward, while in the replay he was at corner- forward but on both of the winning teams in 1927 and 1928 he was in the engine room at midfield, partnering Rathangan’s Joe Loughlin, as Kildare overcame Kerry and Cavan respectively.

In the 1927 final, Gannon’s fielding was a critical factor in what was a dour midfield struggle for much of the game. Kildare, if they had taken their chances, would have won by more than two points (five points to three).

Favouritism didn’t help Kildare in the 1928 final. Some things never change. They had a dubious, allegedly “thrown” goal from Paddy Loughlin, one of three Rathangan brothers on the panel, and a late Bill Mangan point to thank as they edged out the Breffni men by a point. The number of mentions Gannon receives in the Nationalist’s match report highlights his influence on Kildare’s victory.

He was back at corner-forward for his last All-Ireland Final as a starter, the 1929 re-match with Kerry, as Kildare failed in their bid for a three-in-a-row. That was to be his last appearance in the white jersey. He was replaced by Kildare clubmate Albert O’Neill for the National League Final against the same opposition a couple of months later and despite still being a young man and remaining for a couple of years, his inter-county career fizzled out somewhat.

He is said to have played club football in Laois at some point in 1928 but as Catherine said when that slipped out in the Oral History interview, “we don’t know what happened there. That probably shouldn’t be spoken about!”

Injury may have played a hand in the relatively early end to his county career. He was riddled with arthritis in later life. That said, he devoted his remaining playing years to his club, which operated under various names in first half of the century.

Bill played in seven county finals (eight including replays) and it would have been one more had Ellistown not granted them a walkover in the 1938 decider. They were champions four times in that period (’27, ’29, ’30 and ’38) but Ellistown gained revenge in the 1939 decider in what proved to be Squires Gannon’s last county final.

Round Towers, like Kildare, went into the doldrums after that, but had another glorious spell in the ‘50s and early ‘60s. Gannon’s nephew Mick Leavy, labelled “The Don”, captained the 1959 winning team as Towers appeared in eight finals in ten years between 1954 and 1963, winning three titles.

It was said that Squires loved nothing better than to take trips to other parts of Ireland. Donegal was one such destination but his favourite was Kerry, home of the great rivals from his playing days, where any of that Kildare team were always treated royally, such was the respect in which they were held by the Kingdom.

In 2020, Kildare County Council announced that they were commissioning a commemorative sculpture that would “celebrate the trophy, captain and team and some of the key values of modesty, community and hard work that are synonymous with Squires Gannon.”

A fitting tribute to the first and last Kildare captain to lift Sam Maguire.

* A certain L. Tompkins of Eadestown was the winning captain with Cork in 1990.