The Bagnalls – A Family Steeped in Club Rugby Tradition

In last week’s edition of the Kildare Nationalist we carried a feature on the Bagnall family of MU Barnhall RFC who are participating in the Aviva Safe to Dream Team Programme.

DID you ever meet a rugby family? A real rugby family, I mean. Even their lovely dogs seem to be rugby aficionados! 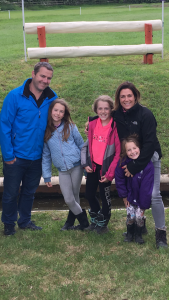 The Bagnall Family from Celbridge

The Bagnall family from Celbridge are steeped in the tradition of club rugby with past links to the likes of Terenure, North Kildare and now MU Barnhall RFC and of course Leinster Rugby where Dad, John, is the Coach and Player Development Officer and Mam, Jennie, is Women’s Development Officer.

Not to be out done their three daughters, Hannah, Zoe and Lucie, as well as playing with MU Barnhall have in the past week featured, along with Munster Rugby and Ireland International player, Eimear Considine, in the recently launched Aviva Safe To Dream Team online video skills programme, the Aviva Mini Rugby Virtual Skills Hub. Former Munster, Ireland and Lions outhalf and now La Rochelle Head Coach, Ronan O’Gara is another ambassador with the programme.

John Bagnall, whom we will feature on these pages in the coming weeks, has carried out the role of Leinster Coach and Player Development Officer for the past ten years and judging by the number of local young players who have been making the grade with Leinster as well as the other provinces, his term is a definite success.

Jennie Bagnall too has been involved with Leinster Rugby for ten years as Women’s Development Officer, initially covering the entire province, but now working with three others since September of last year. She was also instrumental in setting up women’s rugby in MU Barnhall RFC.

Participation levels for women’s rugby has been increasing in Leinster over the last ten years, Jennie tells us. “The slowest age group initially was the U12 group but the “Give it a Try” Programme has been a huge success and we managed to recruit 700 new U12 players in October/November last year. It is now the fastest growing age group and I just hope that these players will return when we are allowed back playing again”, Jennie explains.

Barriers to girls turning to rugby includes concerns of Mams and Dads who equate rugby to what they might see with Leinster and Ireland rather than what happens at club level, although getting access to school kids because of the strength of other sports can be challenging also. “The recruitment, late last year, of the Club Community Rugby Officers (CCRO) has been a big boost in the recruitment of boys and girls to rugby,” Jennie Bagnall adds.

Aviva Ireland launched the online hub Safe To Dream Team programme to improve access for young people on their sporting journey within clubs or at home, through online skills videos, and advice and support from leading sports ambassadors.

Hannah Bagnall, who plays U12, Zoe, who plays U10 and Boys Rugby and Lucie, who plays U8 and is known at home as “The Squirrel” because of her dashing playing style, helped to produce five on line rugby skills videos with Munster’s Eimear Considine as part of the programme.  Through the programme Leinster’s future rugby stars will have the chance to build their confidence and hone their skills, developed by IRFU coaches and hosted by Considine.

The three Bagnall girls are past masters at this having produced some home rugby promotional videos during last year’s lockdowns. Another family from Bantry in Cork also produced a further set of five videos with Considine and young Leinster players are now encouraged to watch the 10 videos and then post their own home videos on the skills covered.

Speaking at the launch of the Aviva Safe to Dream Team recently Eimear Considine said, “I always wanted to represent Ireland in sport, but little did I know I would do so playing rugby as I was a relatively late starter. It has been a dream come true for me to play for Ireland, and it’s a dream for lots of children.”

Jennie Bagnall again repeats her hope that the 700 “new recruits” to girls’ rugby will return when Covid – 19 restrictions are lifted but she worries that the lack of coaches and volunteers will cause a problem as she quickly passes the ball to the court of her husband as deftly as any good scrum half might do.

The Bagnall girls are looking forward to getting back to playing rugby again and to meeting their friends, their coaches and to visiting other clubs as well. Lucie puts it well when she says she’s looking forward to the contact again. Although “The Squirrel” was referring to the on the field “contact” I think everyone else was thinking of the social contact too.