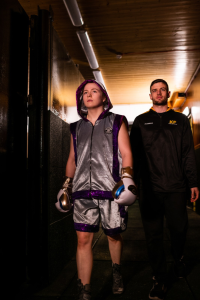 St Brigid’s BC Katelynn Phelan with her Coach, Niall Barrett of Unit 3 Health and Fitness in Naas Photo: Babs Daly

There was speculation that Phelan would face Anissa Benyoub but the French champion had to withdraw, it appears.

Kopinska is known to be a tough durable opponent who has fought Ireland’s Katie Taylor, who stopped her in Round 3. The Polish boxer however, went the distance with such boxers as Chantelle Cameron, the current Light Welterweight World Champion as well as Estelle Moseley, the 2016 Rio Olympics Champion and Eva Wahlstrom, former Super Featherweight Champion.

Phelan’s Management Team feel that Kopinska will provide some great learning experience for the St Brigid’s BC fighter who, if all goes well, could have a World Title fight in Goffs later this year.