ST COCA’S AC’s Paul Robinson made a superb start to the European Indoor Championships in Poland on Wednesday night when finishing third in Heat 4 of the 1500m in a time of 3:40:07 to claim a fastest qualifying spot in Thursday evening’s final. 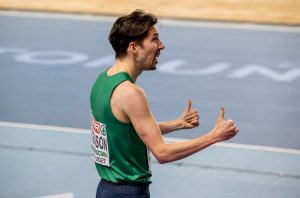 The DCU student, who, is coached by Nic Bideau, is in outstanding form at the moment after returning to full fitness following a harrowing time out injured, will be joined on the starting line tonight by Andrew Coscoran who finished third in Heat 2 on Thursday night in a fast time of 3:39:00.

Also in action on Thursday night will be Kildare AC’s John Fitzsimons who competes in the 800m  alongside Mark English and Cian McPhillips who finished in first and second place to Fitzsimons’s third in the recent Irish Indoors at Abbotstown. Carlow IT student, who, along with McPhillips, is coached by Mullingar’s Joe Ryan, came home in a time of 1:47:80 in Abbotstown.