Kildare based Manguard Plus, who are the title sponsors of Kildare GAA’s Centre of Excellence in Hawkfield, and the Minor Championships, have extended and increased their sponsorship of the SSE Airtricity Premier Division Club, St Patrick’s Athletic for the 2021 season. 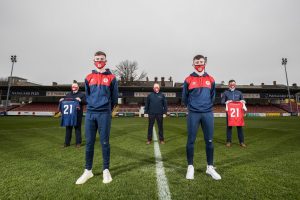 Manguard will again sponsor the main stand at Richmond Park, as well as being upper back of jersey sponsor on the club’s home and away kits for a second consecutive season.

Furthermore, Manguard Plus will also appear as upper back of jersey and training gear and travel wear sponsor of the St Patrick’s Athletic Academy teams for the first time.

Manguard Plus is one of Ireland’s leading private security service providers, offering clients professional solutions to their security needs, more information on manguardplus.ie

St Patrick’s Athletic Director of Football, Ger O’Brien said, “We would like to thank Manguard Plus for their continued support heading into the 2021 season. The sponsorship and support of a company like Manguard Plus is huge for St Patrick’s Athletic. We have continued our great relationship and it continues to grow and develop. They are one of the leading private security providers in both Ireland and the UK with an excellent reputation and we are delighted to have them on board again.”

Managing Director of Manguard Plus, Sean Hall, said, “We are delighted to sponsor St. Patrick’s Athletic. The Club has a long and successful history and is synonymous with best practice, top players and encouraging good team spirit for over 90 years. The high calibre of players is testament to St. Pat’s ethos of continually striving for excellence and bringing out the best in its players. Manguard Plus is committed to supporting and sponsoring St. Pat’s as it continues to play such a vital role in the community.”

Sean also spoke about the extension of their sponsorship to include the back of our Academy jerseys: “I passionately believe in nurturing young people through sport, it gives them confidence, a sense of solidarity, a role and responsibility. It is amazing to see the change in young people who actively participate in sport. It bands an entire community together and helps to foster huge loyalty and pride. St. Pat’s is consistently leading the way, thinking ahead and planning for the future of the Club and it is honour to sponsor them.”