IN this week’s Kildare Nationalist Sport we continued our GAA Heroes of the Past series when Richard Commins took a look at Sarsfields and Kildare great, Pa “Boiler” White.

Each of the heroes featured in this series to date have one thing in common: they have all won at least one All-Ireland medal with the Lilywhites and in most cases multiple provincial titles. 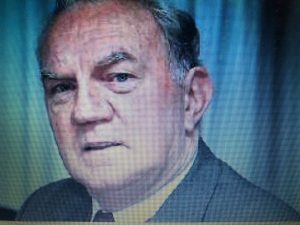 It says something, then, about Pa “Boiler” White of Sarsfields that he was included in the Kildare Team of the Millennium when his career coincided with one of the darkest periods for gaelic football in the Short Grass County.

White was born in 1924, just as Kildare’s glory days were about to reach their peak and his football playing days at the highest level were from 1940 to 1955. With Kildare enduring a barren run, in terms of Leinster Championships between 1935 and 1956, Boiler must have felt the fates were against him, although he was a selector and team manager for the provincial success over Wexford in 1956.

At club level, though, it was a quite different story. Newbridge GAA had been very much in the doldrums between 1921, when St. Conleth’s won the County title on an objection over Caragh, and 1937 when a re-constituted Sarsfields, formed in 1936 from an amalgamation of the Roseberry and Newbridge Marble Arch clubs, reached the final.

Sarsfields lost that 1937 final to Athy but in the 44 years between then and 1981, the only Sarsfields teams to contest the senior decider contained the name Pa White on the team sheet. Between 1945 and 1955 Sarsfields reached seven finals out of eleven, winning on five occasions, and famously securing a three-in-a-row in 1950-52. White captained the 1951 side.

White cycled across the Curragh to go to school in the Academy in Kildare, which helped build up his fitness. His career in the white jersey kicked off in 1940 when he and clubmate Tommy O’Hanlon, were on the minor team that reached the provincial final. Those two would soldier together for club and county throughout their careers.

Kildare’s record at minor level was diabolical and preparation haphazard (we did not win a Leinster title at the grade until 1973) but White played in the 1940 and 1942 provincial finals in the grade. In his final minor year of 1942 (played in 1943) All-Ireland winning senior trainer Joe McDonald was brought on board and hopes were high heading into the final against their conquerors from 1940, Louth.

The 1942 final was played as a curtain-raiser to a famous All-Ireland senior final between Cavan and Roscommon in front of 68,000 spectators at Croke Park but Kildare were blown aside by the Wee County on a 5-10 to 0-6 scoreline.

Pa was brought into the Kildare seniors as a 20-year-old in October 1944. With a National Football League ruled out by the Emergency, a Leinster Football League ran instead and White was selected in the centre-half-forward position that would become his own for the next decade.

In an interview with the Irish Press in 1970, White remembered a funny incident relating to that match which anyone who has been to Aughrim will relate to.

“Afterwards we had a meal and a couple of drinks. There was Paddy Heavey, Bill Geraghty, Martin O’Brien and Paddy O’Brien, who was driving, and myself in the car when we set off across the mountains for home.

“It was late, there were no signposts on the road and if we lost our way once we lost it a million times. We eventually got home shortly after 5am, but in actual driving we must have covered the journey three or four times.”

Kildare too seemed to meander somewhat aimlessly for the bulk of White’s career but he was a highly regarded and powerful scoring forward in 60 games for the county. He scored 18 goals and 85 points for the county.

His powerful frame saw him selected at midfield for the only Leinster final of his career, the 1946 decider against Laois. Kildare were favourites despite the eleven-year gap since their previous final, but they coughed up far too many close-in frees and Laois star Tommy Murphy took full advantage, scoring eight of his team’s eleven points from placed balls.

Boiler later revealed that he disagreed with the tactics deployed by Kildare that day, with the defence being instructed to foul Bill Delaney when he got the ball.

Kildare lost by two points (0-11 to 1-6) and it was ten more years before they graced another final. In the meantime, organisation within the county left a lot to be desired and Boiler recalled being embarrassed “when I was made go out on the field against Carlow in a Leinster Championship game in 1952, despite the fact that I had an injured ankle. All I could do was hobble around the field for a few minutes. Eventually the selectors saw that I was really injured and I was taken off.”

Eighteen goals was a very respectable tally for an inter-county career given there was no back-door in those days and Kildare were not in the habit of reaching provincial finals. To put in context that puts him level with Tadhg Fennin and ahead of the likes of Daniel Flynn (17), Martin Lynch (16), and James Kavanagh (14).

White’s final start in the white jersey was against Meath in Croke Park in the 1954 championship when he scored three points as the Lilywhites succumbed to a 0-5 to 3-2 defeat. He did come on as substitute in a draw against the same opposition a year later but that was to be his swansong for the county team.

At club level, White was instrumental in minor county titles in 1940 and 1941, the first Newbridge sides to win at that grade, and by 1945 those teams were forming the basis of the senior side that reached the County Final.

Trained by Sergeant Mick Reilly, who had been involved with Kildare in 1928 and Cavan in the ‘30s, Sarsfields young team contained names that would become well-known throughout the county. There was Jim Gaffney, Jim Cash, Ned Keogh, Jack Fitzgerald, the Geraghty brothers Mick and Bill, the O’Hanlons, Tommy and Con, with “Bunny” Kavanagh and, of course, Boiler White in the forwards.

Reports of the game in the Nationalist highlight the “youth and training” of Sarsfields as critical in a 2-9 to 0-4 victory over the 1943 champions, with White among those commended for “trojan work”.

Two years later they were back in the final against the Army team from the Curragh, a game White described as his greatest match in that Irish Press interview.

“We won it but it was a wonderful match of good football. The Army at that time could field fifteen inter-county players but yet we managed to take the title (by 1-8 to 1-5). It was one of the best moments of my life.”

The Nationalist had no doubt who their man-of-the-match was.

“Let it be said that “Boiler” White won the match for his side. It is no disparagement to his comrades to say this as his wonderful sense of position and untiring work gave his forwards every chance of securing scores. His display marks him as the foremost player in the county.”

Sarsfields captain Mick Geraghty paid tribute to their opponents and hoped that the sides would meet again in the 1948 final. They did, but on this occasion the roles were reversed with the Army winning by 2-7 to 2-4 in a game the Nationalist headlined as the “Thrill a Minute Final”. White scored a penalty but the Army, led by Cavan great J.J. O’Reilly converted one of their own from the rebound to secure the win.

Again, the Sash took a year off from the final as Ardclough overcame the Army in 1949’s decider but the Newbridge men got their three-in-a-row underway in 1950, beating Carbury by 1-9 to 2-3. White was outstanding once more but it was considered a poor game despite the best efforts of the Groomes, Rasher Farrell and Dermot Bourke for the losers. White scored four points.

A North Division team, backboned by the likes of Davey Dalton from Kilcock, gave Sarsfields a real battle in the 1951 final but White captained the holders as they retained their trophy on a 2-11 to 1- 7 scoreline. Boiler weighed in with another four points.

The three-in-a-row was captured in an eight-point win over Carbury in 1952. Again, the two sides didn’t produce a thriller but White and Seán Brennan’s midfield dominance was considered crucial with White scoring 1-3 in their 2-6 to 0-4 success.

Rathangan brought their unbeaten run to an end in the Quarter Final in 1953 in a controversial encounter when the holders had three goals disallowed. Incredibly, 69 years on, no club has repeated the three-in-a-row although plenty have won doubles.

After Clane ended their campaign in 1954’s Quarter Final, Sarsfields were back as favourites for the 1955 decider against Kilcock. But despite White again turning it on in a final, when he was the “architect of every good move”, and despite three first-half goals for his side, Kilcock came back from a ten-point deficit to draw with Kilcock’s Gibbons brothers, Tony and Paddy, Larry McCormack and Davey Dalton prominent.

White had registered 1-7 in the drawn game but the entire team only managed 1-4 in a very different replay as they went down to Kilcock’s 0-9 on a day when McCormack and Paddy Gibbons again excelled.

Sarsfields were to lose three successive semi-finals after that and White’s days in the limelight were over. He loved his career, though, telling the Irish Press, “They were wonderful times, some of the best in the world!”. Apart from the five county titles he won the same number of Leader Cups and represented Leinster in the Railway Cup.

Away from the GAA pitch, Boiler was involved in the development of Newbridge Greyhound Stadium, was the initial owner of the Killeen Golf Club, and was club captain at the Curragh golf club.

He continued his involvement in GAA however and was a selector for Kildare in the early 1970’s. When he wasn’t developing property, he served his time as a bookie and publican.

Boiler White died in 2012 at the age of 88 having been pre-deceased by his wife Josephine. Of course, his grandson Gary “Chalky” White captained Kildare to an All-Ireland under-21 final in 2008, played 84 times for the seniors and continues to soldier for Sarsfields, with whom he has matched his legendary grandfather’s five senior county titles.