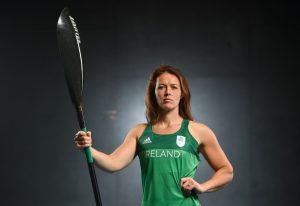 To celebrate International Women’s Day today we asked Jenny Egan, Salmon Leap Canoe Club, Leixlip, Irish International Canoeist and Member of Sport Ireland Women in Sport Steering Committee, to provide us with her thoughts on women in sport in Ireland for last Tuesday’s Kildare Nationalist and we include Jenny’s article here today.

I believe education and sport go hand in hand. I graduated from DCU in 2013 with a first-class honours degree in Athletic Therapy and Training together with winning the Research Achievement Award for her Thesis “The Effects of Acute Intermittent Normobaric Hypoxic Exposure on a Range of Physiological Parameters”.

I would be a strong advocate for gender equality in sport. In conjunction with my training regime of 14-16 sessions per week, I am the only athlete representative on the Sport Ireland Women in Sport Steering Committee, which was established in March 2019 to steer the Sport Ireland Women in Sport Policy and I was also one of 20 female athletes chosen to represent the 20×20 Campaign for the year 2020.

The Sport Ireland Women in Sport Policy that the committee has been set up to steer and guide has four main target areas: Coaching and Officiating, Active Participation, Leadership and Governance and Visibility.

This policy shows that there is a place for everyone in sport, you do not need to be an athlete to be involved in sport, for example you can be a board member of a national governing body, a team manager, or a coach.

‘Sport Ireland’s vision for women in sport is one where women have an equal opportunity to achieve their full potential while enjoying a lifelong involvement in sport’.

The four target areas of the Sport Ireland Women in Sport Policy have set objectives:

Sport Ireland also have a new Women in Sport weekly sports series called WOW Women on Wednesday Sports Series which puts a spotlight on the many ways that women participate in and benefit from sport and physical activity.

Every Wednesday Sport Ireland share Women on Wednesday sports stories to inspire women to make sport and physical activity a part of their lives.

I am very honoured to be involved in this series doing weekly videos providing tips to increase active participation. As the sole elite athlete on the committee, I am in a position to try to maximise the Visibility pillar of the policy.

I believe that as ambassadors for our sport it is our responsibility to be as visible as possible, therefore, always taking opportunities to be visible through media coverage. Visibility is so important as it shows young girls that it is possible to achieve both nationally and internationally in their chosen sport. Therefore, it is highly important that women’s sport is covered through all forms of media.

The Sport Ireland Women in Sport Policy has provided funding to different sports and different national governing bodies nationwide. The governing bodies then choose which target areas they want to focus on. Canoeing Ireland decided to currently focus on the area of Leadership.

They have started a new campaign of their own called “Bridge the Gap” and in January 2020 I completed the “Bridge the Gap” Leadership course, which I am now putting to good use, applying my learnings from this into action towards improving different areas of sport.

Sport Ireland are also leading the way with High Performance female athletes by launching The Maternity Policy in December 2019. This Policy has received attention worldwide by many athletes who have praised the support of Sport Ireland for Women in Sport.

This is extremely positive for the future of Irish sport with so many female athletes around the world showing that it is possible to have children and continue to produce World Class performances. The guidelines show that the Sport Ireland High Performance Strategy continues to emphasise an athlete centered support system.

The 20×20 Campaign was launched in October 2018 and it set out to create a measurable shift in the perception of girls and women in sport in Ireland. This campaign had three targets to reach by the end of 2020:

Although the coronavirus pandemic disrupted the global sporting calendar, research conducted by Behaviour and Attitudes found that 80% of Irish adults – rising to 84% of Irish men, are more aware of women’s sport than before the 20×20 launch in 2018, 73% of the population – rising to 75% of men, say the 20×20 Campaign changed their mindset positively towards girls and women’s sport, with 68% stating that the 20×20 Campaign influenced them to support women in sport more.

42% of women say they are participating in more sport and physical activity due to awareness of the 20×20 Campaign, 50% of the population and 60% of females say they would be more inclined to purchase brands that support women’s sport. Participation grew by 13% while attendance in women’s sport increased by 17% during this period.

The 20×20 Campaign was a fantastic campaign, the progress, the positive effect and the success that this campaign has instilled into women’s sport in the last few years is just immense, however, it is hugely important that the current positive momentum of the 20×20 Campaign continues to grow in the years to come.

A critical part of ensuring the upward curve and progression that we have seen in women’s sport in recent years continues, lies in the hands of parents and the perception they instil within their children at an early age and throughout their childhood.

I think that it is highly important to change the early perception at grassroots level; parents are children’s primary role models in life and play a major part in achieving and contributing to four, five, six-year-olds and beyond growing up seeing that it’s not women’s sport it’s just sport.

I’ve heard parents before saying ‘ah it’s ok if my daughter drops out of sport, she’ll find something else, but I really don’t want my son to drop out of sport’.

Unfortunately, that is the perception and attitude that has been out there in the past, but thankfully, it is changing for the better and something we need to concentrate on continuing to improve into the future.

The 20×20 Campaign slogan of “CantSeeitCantBeit” is a very powerful slogan and is very true in so many ways. The more that young girls and women see other women competing, achieving and enjoying success and recognition in sport, the more they will realise how accessible and achievable it is for them too, if they do the right things along the way.

Rugby star Paul O’Connell did a very powerful interview where he talked about his own young daughter and the importance of the 20×20 Campaign. Having high profile sports people like Paul O’Connell and ambassadors talking more and more about women in sport, will help parents to relate and come on board.

With them on board we can start to change the perception and make even more of a difference.

She is currently in training for qualification for the Tokyo Olympics