Golf Ireland has released its fixture list for 2021, which they say “seeks to provide a comprehensive array of competitions for all levels.”

In a statement Golf Ireland says, “The COVID-19 pandemic has once again had an impact on the start of the season, but Golf Ireland’s plan is to adapt by starting the championship season no earlier than the end of May, with many events rescheduled for what is hoped to be a busy autumn period.” 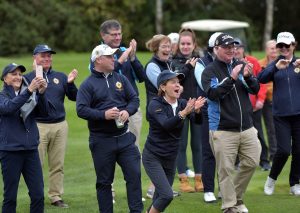 “Moving these championships also ensures they will now coincide with the Carey Cup Match against the Metropolitan Golf Association, which will take place in Carton House on 12-13 October. Fittingly in the inaugural year of Golf Ireland this match will include mixed teams for the first time,” the statement continues.

“The Irish Men’s Amateur Close Championship, originally scheduled for 8-12 May, will now take place on 13-15 August at Tullamore, while the Irish Senior Men’s Amateur Open Championship will be played at Donegal on 20-22 October,” Golf Ireland adds.

“The international dimension of many of Golf Ireland’s events is obviously dependent on the pandemic and its possible impact on international travel. Golf Ireland is closely monitoring this and will continue to consult with the relevant government departments and agencies in both jurisdictions with a view to plans for these events, and also for the staging of the European Women’s Team Championship, scheduled for Royal Co Down on 6-10 July.”

Meanwhile, the draws for inter-club competitions will be conducted by Golf Ireland’s four Regions over the next fortnight, and published later this month, with the intention of commencing no earlier than the middle of May, subject to public health restrictions.

This season’s inter-club competitions will see a return of the foursomes format to events that have traditionally been played in such a way, with special safety measures to be communicated to competitors in advance of the start of the competitions.

Mark Wehrly, Director of Championships with Golf Ireland, said: “We know that golf is a low-risk activity and are hopeful of a return at club level for our sport very soon, after which we will look to progress towards running our competitions throughout the summer and autumn.

“We’re very grateful to all of our host clubs for their forbearance and continued enthusiasm in helping us to achieve this. At such a difficult time for everyone in the industry, it is a testament to them that we are able to present such a comprehensive fixture plan for the year ahead.

“There are still some uncertainties in the road ahead and we will continually review our schedule as well as our plans for managing COVID-19 at event, but as things stand we hope to be very busy this season.”

Online entry is expected to open before the end of March.