In this week’s Kildare Nationalist Sport, Roisin Byrne reflects on her selection on the LGFA/TG4 Intermediate Team of the Year, her recovery from injury and the future of ladies football in Kildare and Sarsfields.

RÓISÍN Byrne was surprised when she was named on the Sport TG4/LGFA Intermediate Team of the Year two weeks ago but was never the less delighted with the award and the recognition after returning to full fitness following a difficult few years with injuries. 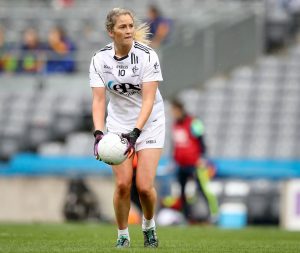 I was at home with my boyfriend, Liam (McGovern of Athy fame) and our flat mate, Anna, when the congratulations started to come in on my phone. I didn’t even know the event was on. My Mam, Fiona, my No 1 fan, was over the moon, it was like after winning the lotto, she was crying and everything. My Dad, Seamus “Chilly” Byrne, was very happy too as were my brothers Cian and Sean.”

The Primary Teacher in St Conleth’s and Mary’s NS in Newbridge, where she teaches sixth class, can’t wait to return to school on Monday next. “I’d snap your hand off if I was  told I could  go back tomorrow,” she admits.

Like her other county colleagues whom we have spoken to on these pages the Sarsfields player says that the month or two after we lost to Laois was very tough to take. “We may have been unlucky but we still lost so there was a bit of responsibility on us to say it was in our hands and we didn’t deliver in the end. We have to make sure it’s not going to happen again.”

A shoulder injury curtailed Byrne’s football career over the last while and she only returned to fitness last February. “It was tough at the start when I knew that I wasn’t going to be playing football for a while.  You’re playing for so long that your identity is wrapped up in Róisín the footballer but after a bit of reflection I realised there was a lot more going on in life than just football so maybe it was a blessing in disguise as well.”

The absence through injury allowed her to travel with Vietnam, Bali, Singapore and Mexico all ticked off the bucket list during that time.

“I did hit rock bottom after the injury happened and I got very low for a while. I was wrapped up in the thoughts of not playing and what was I going to do with myself but then I realised I had a job, a family and friends. I had good people around me who pulled me out of it.”

Kildare Manager, Daniel Moynihan and his team were very supportive of their injured forward at that time and always kept in touch and Byrne enjoys the manager’s style. “Daniel came in and said even with a core group players under 23 we were not going to win something in the next year but there was a need to build something so they put a plan in place and there is a really good link with the underage too,” she explains. “There was never an issue with talent in Kildare but maybe they didn’t commit but that has changed in the last couple of years. People want to play for Kildare and there is a huge interest in coming into the Kildare panel this year and this is because of the work that the that Daniel and the lads have done.”

“People are enjoying it and others are hearing of how much fun we are having so we have a bunch of talented players who have a want and need to play for Kildare,” the corner forward adds.

Former Kildare captain, Aisling Holton, would have been one player that Byrne would have looked up to. “She took players like myself, Grace Clifford, Emer Fogarty and Erica Byrne under her wing and it is a big thing to make a 17-year-old feel comfortable in the squad. Aside from that her that work ethic was excellent,” Byrne explains.

“I was marking her in training and at 20 I was nearly crying after training that I couldn’t mark her but Chris Lynch, a Sport Psychologist, asked me who the best midfielder in Ireland was, and when I said Aisling, he replied that I was never going to face a better opponent in a game. Every time I marked her I was only getting better so I always looked up to Aisling.”

Róisín Byrne’s hopes and wishes are very simple. “My wish is that everyone gets to play which is not something you had to think about before last year. I really hope we have a League and that we get promoted to Division 2. I believe we should have been promoted last year and I think that is something they slipped up on in not letting us finish out the League.”

“We want to win Leinster and we want to win an All-Ireland and I definitely think we are capable of it. We’re not here just to compete now even though the Intermediate Championship is very competitive with seven or eight teams in contention, but I think we are up there with them,” she concludes.