This week’s Kildare Nationalist Sport carries an interview with Kildare and Johnstownbridge Camogie star, Siobhan Hurley, who is back in her teaching role and looking forward to camogie and club and county level.

IT took a while for Siobhan Hurley to get round to talking about her passion for camogie when we caught up with her late last week. She was just delighted to get back to her teaching role in Timahoe National School. 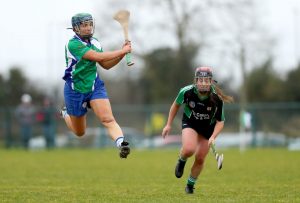 “Online learning is tough on Junior and Senior infants and it is very tough on parents who have to give a huge amount of time,” she explains. “Our parents were absolutely brilliant but I don’t know how parents managed between working from home and having multiple kids to deal with.  It was great day coming back in on Monday; the kids were absolutely thrilled, all the teachers were delighted to be back and as it was only Junior Infants to Second Class back, they had the whole yard to themselves so that was an extra treat for them.”

The Hurleys themselves created a bit of a bubble with Siobhan and her brother, Sean and sister, Aine, moving back in with parents, Irene and John, during the first lockdown and another brother, Pauric and his wife, Caroline next door and a sister Emer and husband, Shane next door again.

“We were really lucky we could see each other and we were all together,” Siobhan says of the “Hurley Bubble”. “A lot of people couldn’t see anybody.”

Siobhan Hurley stepped away from the county camogie scene early last year because it had taken a while to appoint a new Manager and there was no preseason as such for which she “wasn’t overly impressed. She was coming back from injuries too and playing with Johnstownbridge and she felt she couldn’t give it her all.

“I rejoined the panel, as did a lot of other players after lockdown, and it was amazing,” she says enthusiastically. The Management that they have in place are doing a brilliant job and there is a huge interest now with 40 girls training some nights and everybody was showing up and training hard.”

“Chubby” (Declan Curran, Eire Óg Corra Choill) had come onboard, He was our trainer with Johnstownbridge and it was brilliant to have him and GT (Troy) there,” Siobhan adds. “While we lost our two matches in the championship, we laid a very good foundation for this year and the fact that the two lads are in place and we have our preseason going online, everybody is together. We have a massive panel and we’re hoping to have two teams this year.”

“Really last year was a brilliant year for Kildare Camogie in that it got the interest back and those 40 girls enjoyed training so they all came back again this year with the added extras of girls who have been around for years and maybe just didn’t want to commit last year and we have all the minors coming up.”

Why the turnaround we ask? From my own point of view, I had a lot of injuries and probably didn’t think I could play with two teams but because the county season was separate from the club season, I was only training and playing with one team so I could manage it,” Hurley explains. “I had also done a fair bit of rehab as well so I was confident enough that I could manage both teams.  For other girls maybe it was just really missed playing camogie and when it was an enjoyable environment, the lads were very good, there was a good team spirit and everybody was getting on very well.  People wanted to come back.”

Siobhan Hurley reminisces fondly about the great years for her club, Johnstownbridge and their All-Ireland success. “We had three amazing years and it really brought the community together and it was great for the young people to see that level of success and to believe that they too could have that success. Hopefully we have a good few years left in us still,” she says

Looking to the future Siobhan Hurley is hoping Kildare can compete very well in Division 2, and to strongly compete in the intermediate championship as well. “We are prepared for it this year so there is no reason why we can’t do that. For the club we definitely always hope to win the championship, last year’s and this year’s,” she adds.

Off the field the Johnstownbridge star starts a Degree in Setanta, the first three modules of which concentrates on Youth Athletic Development, in which she is really interested and hope to use to help the club in the future.

Siobhan says she hopes to continue playing for as long she can and would generally have a positive outlook. “You have to see the positive in everything and keep going; there is no point in thinking negatively, it doesn’t help anything,” she concludes.