Syndicates “Queen” Has Another National In Her Sights

WHILE most roads lead to the Cheltenham Festival this week another National is in sight for the Willie Mullins-trained Cabaret Queen who could bid to add the BARONERACING.COM Leinster National to similar races she has already totted up. 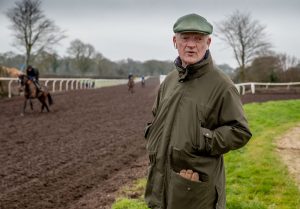 The admirable nine-year-old can boast two wins to her name since joining Ireland’s champion trainer, the first coming in the Munster National at Limerick and the next in the Kerry National at Listowel.

The English Grand National at Aintree is now the ultimate aim but in the meantime Sunday’s €80,000 feature at Naas is under strong consideration for Cabaret Queen and her connections. The mare carries the increasingly familiar colours of Syndicates. Racing and the head of that operation, Jack Cantillon, would relish her lining up on Sunday for a number of reasons.

“It’s nice to have Naas as an option for Cabaret Queen,” Cantillon said following the latest forfeit stage saw her among 37 remaining entries. “Bar One Racing are great supporters of the sport and if she’s wasn’t to go to Cheltenham, where she holds an entry in the Mares’ Chase, we’d love to go here for the Bar One Racing Leinster National.”

“As a Grade A Chase, it’s a Grade 1 on a catalogue page which makes it particularly appealing for mares. Cabaret Queen has been brilliant for us, as the first horse we bought. She won the Munster National and the Kerry National so it would be a nice feather in the cap to add the Bar One Racing Leinster National to that, on our way to our bid to claim the ultimate National, the Aintree Grand National.

Jack’s father, Dermot, is the chairman at Naas Racecourse so while the current Covid-19 restrictions prevent owners from attending the races, if Cabaret Queen could snare a third domestic National it would be all the sweeter at Naas.

“Of course as someone who has been going racing in Naas all his life, it would be a thrill too to land such a big prize at the track. But we will just have to wait and see.”

Apart from Cabaret Queen, syndicate members have enjoyed wonderful success with Tonkinese, New Emerald Bay and Grangee, who takes her place in the Cheltenham Champion Bumper off the back of victory at Grade 2 level.

“Everything we do with Syndicates.Racing is about expanding the sport and industry to as many people as we can and we are constantly looking at ways to do that, dabbling in the breeze-up sales with our Bargain Breezers initiative for example.

“We are about demystifying the sport, opening it to everyone and making it all accessible without it all costing an arm and a leg. And that will always be our focus.

“It is unfortunate that owners cannot attend the tracks at the moment but it’s great that racing is going ahead and we have constant interaction from trainers and jockeys, and among ourselves, and to be thinking about having horses run in Cheltenham in our colours, as Cabaret Queen did last year and which will hopefully be the case this year, is the stuff of dreams.”

Cabaret Queen is one of nine Willie Mullins-trained runners which stood their ground and her stable companion Brahma Bull is the top weight.

Currently heading the betting with sponsors Bar One is 6/1 shot Run Wild Fred, who is now in the care of Denise Foster and his stable companion Coko Beach is 10/1 following an impressive victory in the Thyestes Chase at Gowran Park and then the Ten Up Novice Chase at Navan. Recent Naas winner Minella For Dawn gives Foster a strong hand in what could be her first big weekend in her new role. Recent dual Punchestown winner Atlantic Shore is currently the 7/1 second favourite for trainer Philip Fenton.

History was created at Naas last year when Big Blue became a first Australian based runner at the track and on Sunday American trainer Kerri Brion could look for some quick compensation with French Light who ran a fine race at Punchestown last time but was subsequently disqualified for an administration error involving the weight the horse had to carry.

French Light certainly would appear to hold every chance of landing Grade 3 honours in the Bar One Racing Kingsfurze Novice Hurdle, while the other chief supporting race on the day is the BAR ONE RACING Directors Plate which has attracted nine novices including Paul Nolan’s stable star Latest Exhibition.

Naas Racecourse are also running a competition on the eve of the Cheltenham Festival this weekend. To be in a chance to win €1,000 worth of bets with Bar One Racing visit https://naasracecourse.com/competition/. The lucky winner must avail of the free bets online with Bar One Racing during this years Cheltenham Festival. The €1,000 worth of bets will be split into four €250 on each day of the festival. To visit T&C’s and to enter the competition visit https://naasracecourse.com/competition/. The competition closes on Sunday 14 March. Sunday’s action will also be shown live on TG4 from 2pm.
Filed under: HRI, Naas Racecourse, Willie Mullins