NAAS man, Gary Cully, the Sarto Diva, faces the biggest test of his professional boxing career on this Friday night when he faces Viktor Kotochigov from Kazakhstan for the vacant WBO European lightweight title at the University of Bolton. 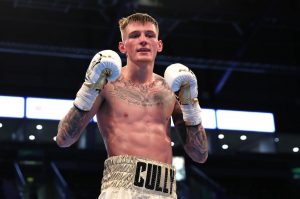 The man they call “The Diva” last fought in August of last year when he defeated Welsh Champion, Craig Woodruff, in a fight in which he was always in control despite a fifth round knockdown and mandatory count. Commenting to the Kildare Nationalist afterwards Cully saw the knockdown as a huge learning and career building experience for him.

In the intervening eight months since the Woodruff fight Cully says that he has spent all that time in the gym working on his craft and that in a time when very few athletes are getting to compete he has used the time to learn and improve.

Speaking to the Kildare Nationalist this week the Naas man first of all looked back on the August fight and said, “You can practice how to deal with a crisis in the gym but until you have to go through it in a fight you never know how you will react. I stayed calm and kept my composure and boxed like a very experienced professional in that fight.

Cully is very happy with preparations for Friday’s fight. “Preparations have gone brilliantly for this fight. Most boxers throw the phrase ‘no stone unturned’  but I believe this is actually true in my case. On top of my boxing training I have done strength and condition, two massages a week, an ice bath session a week, flotation and physio sessions. I believe I’m is in the best shape of my life.”

According to Cully’s Coach, Niall Barrett of Unit 3 Health and Fitness in Naas,” Victor Kotochigov is definitely Gary’s toughest challenge to date but the more you challenge Gary the better he is. Kotochikov is a well schooled, tough man from Kazakhstan and is coming to win which will bring out the best in Gary.”

Winning the WBO European lightweight title on Friday night would put Gary Cully in the top 15 in the World. “Lightweight is currently the hottest division in boxing with some superstars at the top and in 12-18 months Gary Cully will be right up amongst them,” Barrett concluded.