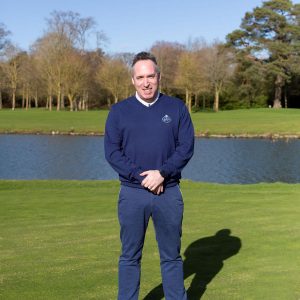 Conor Russell, new Director of Golf at The K Club

Conor Russell began his career as a Professional in 1997, holding Professional positions in Mount Juliet, Headfort and Killarney before taking up the Head Professional position in Sutton Golf Club. After spending over 10 years at Sutton, Russell moved to Portmarnock Links in 2017 and played major roles in both golf clubs.

In Portmarnock, in particular, Russell is credited with being heavily involved in elevating the resort profile, ultimately attracting North American golfers to the links, working to raise the ranking of the course in the major Top 100 lists and implementing and executing a highly successful membership growth programme.

In their statement The K Club said that  “as a PGA Professional and experienced Director of Golf, Conor brings his exceptional track record in coaching, team management, leadership, guest relations and retail excellence to The K Club.

Expressing his delight at the appointment, The K Club CEO, Paul Heery, said, “We look forward to Conor enhancing all aspects of the golf experience at The K Club. His substantial track record speaks for itself and we have every expectation that his enthusiasm, passion and experience will help ensure The K Club realises its full potential as an iconic golf destination.”

Originally from Dundalk in County Louth, with a degree in Golf Studies & Business Management from Birmingham University Conor Russell said, “I really am delighted to be joining The K Club team and look forward to being part of this new phase of developments at this world-renowned resort. I believe the history and quality of the famous Arnold Palmer-designed courses, home to so many thrilling moments over the years, coupled with the owner’s vision and investment make for an incredibly exciting future.”

“Joining The K Club at such a dynamic moment in its history is a real treat and I’m also really looking forward to working closely with our members in developing the club side of The K Club. There is so much enthusiasm, energy and investment happening, not just in golf but across the entire resort, so it’s a very exciting time to be part of the continuing story of The K Club,” the new Director of Golf concluded.