World Famous Curragh – A Local Facility For The Local People

SPEND half an hour talking to Pat Keogh, CEO of The Curragh, and you’ll want to attend all 21 race meetings at the world-renowned Kildare track. Spend any longer talking to him and you’ll want to go out and ride the Derby winner whether it be on a thoroughbred like last year’s winner, Santiago or on Delaney’s Donkey such is the enthusiasm with which he speaks of the venue. 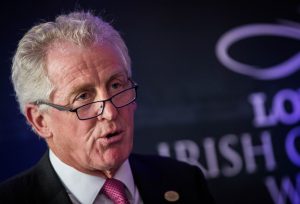 We might have been talking to a Michael Vincent we tease him at the start of our conversation. “That’s right Vincent O’Brien was a legend in our house and my father tried very hard for me to be called Michael Vincent after him and funnily enough my own daughter was born the day after Dawn Run won Gold Cup and I tried very hard, without success, to have her called Dawn so both my father and I failed so what does that tell you about the women we married,” Pat Keogh jokes.

Although he grew up in Rathfarnham in the shadows of Leopardstown and his family were avid racegoers it was to banking that Pat Keogh turned first, spending 25 years with AIB before turning to the racing industry and Coolmore Stud before his beloved Leopardstown came a calling.

After eight very successful years at Leopardstown, it was originally to be five years but a major redevelopment stretched it out to eight, Pat Keogh moved to Lilywhite country and The Curragh. “I was just finishing up in Leopardstown when The Curragh found itself without a CEO,” the Dublin native explains. “They had just opened a fine new facility and they wanted someone to come in with a bit of racecourse experience on an interim basis for 18 months or so.”

Pat had been coming to The Curragh from a very young age and he was impressed with the knowledge and appreciation of the people who attended horse racing there and he had a sense that he was always dealing with people who knew everything about the industry.

Explaining further he says, “I absolutely loved it and the people of Kildare. Their love of the horse and knowledge is fantastic and it was the same in Coolmore in Tipperary. In Dublin people go racing to be entertained as they would to the RDS or the Aviva but in Kildare you turn it the other way round, people go for the absolute love of the horse and then to be entertained.”

“The Curragh team really work hard at keeping that to the forefront of everything that we’ve been doing although there has not been the opportunity to do this as much as we can of late as everything has been online.”

Pat Keogh took over as CEO just after The Curragh had completed it’s €81m redevelopment, €36m of which came from government and then the Covid -19 restrictions pushed race meetings behind closed doors yet he is very positive about how he and his team have handled these challenges.

“Engagement with The Curragh has been very strong during the period and viewing numbers through TV or Social Media platforms are far higher last year than in the previous year. We do miss the live audience terribly and we need a live audience but it has given us the opportunity to bring people into The Curragh while sitting in their own seats at home. We’ve had a lot of initiatives through all social media channels as we whet appetites to come back once it opens up again,” he adds.

The CEO is quick to point out too that the Racecourse is just one part of The Curragh as he talks of the Training Grounds where he says almost 900 horses are trained every single day by some 55/60 trainers. “The Training Grounds go all the way from Maddenstown on one side to Little Curragh on the other and that’s 4km apart and down to Stepaside. You have all that activity and then you have natural beauty and the walks. It’s just an absolutely unique place and there is something going on all the time from an equine point of view every day of the year,” he enthusiastically tells us.

He says that they have done an awful lot on the Training Grounds because of the life as well as the employment that they bring to the Curragh. “Eva-Maria Hefner of Moyglare Stud has funded the redevelopment of the gallops and they are as good as anything anywhere in the world. People travel from all over the country to use the gallops and we would like to see more people relocating here such is the quality of the facility,” he continues. “We can make The Curragh the best facility in the world, and I don’t say that lightly;  it is something Kildare can be really proud of and I mean that for 365 days of year not just on the 21 race days.”

Pat Keogh believes that The Curragh is now a fine facility as he anticipates an audience of 15,000 returning for big days like the Dubai Duty Free Derby with an aspiration to get back to 20,000 and he and his team are very happy with what they have and although there are plans to make some additional changes he sees no rush about doing things that would be nice to have but only when the money allows.

The Curragh would have a permanent staff of 35, mostly employed on the training grounds with a relatively small amount of admin staff, but on a race day such as Derby Day that could swell to 500 people.

“That’s very important,” the CEO says, “as it provides employment to local community and students it also exposes people to our sport and maybe they’ll consider it as their career. All our Race Day staff have a role in making it a good experience for the customer.”

Naas, Punchestown and The Curragh all complement each other according to Pat Keogh and he says the three Kildare tracks work well together. “There is plenty of room for all three tracks and for all three of us to expand.”

With less than two weeks to the first meeting of the season at The Curragh, excitement is building around the place. “Oh, the butterflies have started already,” the CEO admits. “We walked the track a month ago with Brendan Sheridan Clerk of the Course, and he gave a seal of approval to the works we had agreed with him. We’re in the right place but there’s still plenty to be done,” he adds excitedly.

Commercially the two and three day festival meetings are the best for The Curragh with the Derby meeting as the biggest day, according to Pat Keogh. “They bring a lot of people into the area. The plan would be to make the Derby Festival bigger and better with the Friday night for a younger audience and the Sunday as a family day.”

“Maybe the single days do not make money but with them we are investing in the product of racing and it would be our intention to ensure every day has an identity. The track is world famous and our objective is to make sure that continues but maybe we take that for granted,” he adds.

“Maybe too we don’t push this enough, and I even say that against myself as a Racecourse Manager, the thing that brought me in and made me passionate about the industry, was the love of the horse and the appreciation of the horse. Sometimes as an industry we don’t push the actual animal enough, it’s our greatest selling point that we have in the sport.”

“I was exposed to racing from a very early age and loved it and all the things about it, the speed, the beauty, the colour, the atmosphere, the animal, the smell,” he enthuses.

The Gordon Elliott story over the last week or so has set the industry back according to The Curragh CEO. “Gordon Elliott is a fine trainer and has built a wonderful business and has looked after his people and his horses really well. He has acknowledged it as a terrible mistake and it absolutely should not have happened,” he says.

“I have been involved in the industry for a very long time and I know the respect that there is for animals, particularly an animal that may get injured or may die. That respect is one of the things that I’m aware of as a Racecourse Manager with some responsibility for the Training Grounds at the Curragh. I am aware of my responsibility and everyone wo works for me anywhere are all aware of it.”

“It is a local facility for the local people and if that isn’t the case, if the people of the locality, the people of Kildare don’t see The Curragh as their racecourse and stick their chest out and say they’re proud of it then we have failed,” Pat Keogh concludes.

Since this interview the position of CEO of the Curragh has been advertised so Pat Keogh will step down as soon as a new appointment is made and an orderly hand over takes place. In the meantime we wish him and his team every success for the new season.