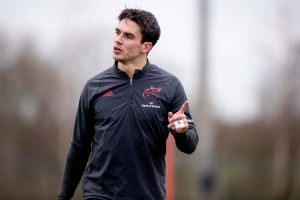 25 year old Carbery, made appearances off the bench in the last two weeks including an important contribution last weekend which ensure a place in the final against Leinster at the end of the month. Carbery has shown no signs of his long lay off either from open play or from the boot in those two substitute appearances.

Meanwhile Naas’ Jimmy O’Brien has retained his place in the centre on the Leinster team which travels to take on Zebre, also tonight (KO 5.45pm) with James Tracy and Jamie named among the replacements along with Clane’s Marcus Hanan, who made his Leinster senior debut earlier this month.

There was good news too with Newbridge’s Jordan Duggan, who signed a contract extension this week, has been included the the replacements for Connacht’s clash with Edinburgh on Saturday night.