Mick Carolan – Centre Back For Kildare, Centre Of Fundraising in Dublin

In this week’s Kildare Nationalist Sport we continued our Heroes of the Past feature with Richard Commins giving in depth coverage on Mick Carolan, outstanding performer for Athy and Kildare and a Spirit of Dublin Award winner in the capital.

KILDARE seem to produce some quite brilliant centre-backs. There was Jack Higgins in the distant past and Glenn Ryan more recently. Johnny Crofton was a stalwart with a national reputation who happened to come along at a low point in Kildare’s football history. 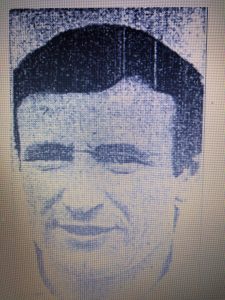 Mick Carolan won the square root of very little playing for Kildare but it says a lot that when the Team of the Millennium was selected there sat the Athy man at number six with Higgins and Ryan squeezed in elsewhere.

As with many we have profiled in this series, Carolan deserves recognition for his contribution off the field as much for his sterling displays on it. He was equally comfortable in a uniform as his Kildare jersey, rising to the rank of Garda Chief Superintendent with responsibility for West Dublin.

He may not have won the major medals with Kildare but his contribution to society in over four decades won him the Spirit of Dublin Award for public service in 1988. His fundraising became legendary and it is said he raised over £1.8m (€2.3m) all told.

Mick set up of a fund for seven children whose parents died when their car plunged into the canal in 1991 as well as others for two children severely injured by a petrol bomb and a hit and run driver, respectively.

A superbly fit athlete, Carolan was forever doing sponsored runs, often on behalf of Coláiste Bríd in Clondalkin, where he was on the Board of Management. With the support of his wife Mary, son and eight daughters, he organised for businesses to pay for groups of kids to be brought to entertainment centres in Ballyfermot and another group were brought to America to play soccer.

Mick even turned his retirement party in 1999 into a fundraiser with 600 tickets sold at £12.50 a head, the money going to the charity of his choice.

Born in Levitstown, between Athy and Castledermot, his athleticism and balance made him a natural at football. Sport was in his blood; his father was a competitive cyclist.

“I remember Father Brady at Levitstown National School used to make a big deal of us. Whenever we played in the leagues, he’d have us parading in the street in Castledermot behind a band. That kind of thing made a huge impression on us young fellas then”, he told an interviewer in 1996.

It wasn’t long before he was making a name for himself on the field. He starred at juvenile level for Athy and was a vital cog in minor teams that won the county championship in 1956 and the league the following year. His performances brought him to the attention of the county minor selectors and he played corner-back on the team that lost to Offaly in the Leinster Championship of 1957.

Kildare seniors had imploded after the 1956 Leinster win, with a disastrous league run preceding a championship drubbing by Louth the following year. The Lilywhites conceded five goals that day and by the following April the raw teenager from Athy was pitched into a divisional league final against Tipperary in Carlow. Carolan acquitted himself well and a week later he was at centre-back in the O’Byrne Cup against Wicklow in Newbridge.

Games came thick and fast and just two weeks after his debut, Carolan was playing in the NFL semi- final against Tyrone. The Nationalist described it as a game when “sportsmanship reached an all- time low and no amount of provocation can justify the tactics of either teams.” The more things change the more they stay the same.

Kildare hit top form, though, winning 3-8 to 1-6 and Carolan caught the eye. He “bore on his teenage shoulders the responsibility of the centre-back position and he acquitted himself magnificently.”

“That match probably gave me the most satisfaction of all”, he said. “It was my first time in Croke Park, I was only seventeen and there I was playing centre-back in such an important and high-profile match.”

In the final against Dublin three weeks later, Kildare failed to take home their first league title but again the Athy teenager earned rave reviews in keeping Ollie Freaney scoreless from play. Having led by four points at half-time, Kildare ran out of steam in the second half and succumbed by 3-13 to 3- 8.

Carolan was to the manor born in the number six jersey, despite a one-point first round Leinster defeat to Offaly where he was the outstanding Kildare back. But if he thought that was a mere blip the following fourteen years in the white jersey would serve up no end of frustration.

Despite his own brilliance in the intervening period, which earned him two Railway Cup medals with Leinster, it would be eight years before Carolan got to play in a Leinster Final, the influx from the 1965 under-21 team providing a surge in optimism as Kildare qualified to meet Meath in the 1966 decider.

He regarded that Meath defeat as the nadir of a career that would ultimately serve up four losing provincial finals and a second league final reversal in 1968. Carolan played at midfield that day alongside Tommy Carew but they struggled to gain any foothold.

That one-point defeat was agonising and who knows how the course of Kildare football, and Carolan’s career, might have changed had Offaly referee John Dowling not controversially blown the full-time whistle as Jack Donnelly was being fouled en route to goal.

Carolan struggled with a hamstring injury in 1968 and missed the replayed NFL semi-final with Sligo but he came off the bench in the final against Down and was instrumental in prompting a second- half rally that brought the Lilies to within three points by the final whistle (2-11 to 2-14).

Again, that league final appearance sadly prompted a shock first round exit in the championship (3-9 to 0-9 to unheralded Laois) with Carolan back in his favoured centre-back position but Carolan was again hugely influential, first at midfield and later at centre-back, as Dublin were hammered 0-18 to 0-7 in the 1969 semi-final in Carlow.

The fruits of that 1965 team seemed to be ripening nicely but with Kildare leading in the run up to half-time disaster struck as Carolan jumped for a ball with Offaly’s Tony McTeague and fell heavily, fracturing his collar bone. Offaly ran out easy winners with Carolan’s loss proving pivotal.

He recovered quickly but Kildare were dumped out by Meath in 1970 and he had moved to corner back for the 1971 rematch with Offaly in the provincial decider. Kildare suffered their blackest day in years, never raising a gallop in a fourteen-point trouncing. The “class of ‘65” would never recover and Carolan never got his hands on a provincial medal.

Committed as ever, he continued in the jersey for another few years, his last appearance coming in defeat to Heffo’s emerging Dubs in the 1974 Leinster semi-final.

Pressed on why the Kildare team of his era were the game’s great bridesmaids, Carolan said that the commitment level of the players was a factor but also the preparation afforded them by the county board. “I didn’t think we were as finely tuned as other teams such as Dublin for instance. They seemed more professional.” A penny for his thoughts on today’s game.

He is a traditionalist, preferring catch-and-kick to short-passing although he acknowledged the job Mick O’Dwyer did with the team. He had been in the running for that role in 1996 but had to settle for managing the minors for a few years later on. He also managed a number of club and underage teams such as Monasterevan, Grange and Ballymore.

At club level, Athy were in the doldrums for much of Carolan’s career, but despite being settled in Clondalkin he came back to lift them back to senior status in 1974 when playing midfield in the Intermediate Final against Sallins.

A fitting swansong to one of the greats, on and off the field.