AFTER his hattrick of winning predictions in Day 1 of the Cheltenham Festival on Tuesday, former Aintree Grand National winner and guest Tipster in this week’s Kildare Nationalist, Niall “Slippers” Madden, continued his good tipping form at Prestbury Park on Wednesday with a double success including his Nap of the Week, Monkfish, who came home a 1/4f winner of the Brown Advisory Novices Chase for Willie Mullins and Paul Townend. 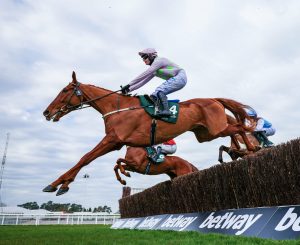 “Slippers” Nap of the Week, Monkfish, winning the Brown Advisory Novices Chase for Willie Mullins with Paul Townend on board. Photo: INPHO/Mark Cranham

“Slippers” fancy, Bob Olinger, a the winner of the Grade 1 Lawlor’s Hotel, Naas Race at Naas, led them all home in another outstanding performance providing another win for the Henry De Bromhead/Rachel Blackmore combination at a price of 6/4f in the opening race of the day, the Ballymore Novices Hurdle.

“Slippers” other two fancies for Day 2, Chacun Pour Soi and Kilcruit just lost out in the closing stages of the Queen Mother Champion Chase and the Champion Bumper  respectively.

See “Slippers” predictions for Day 3 in this week’s Kildare Nationalist, in your shops now.