Will Connors Ruled Out Through Injury

THERE was bitter disappointment for Kildare’s Irish International, Will Connors, when the Ireland team to face England at Aviva on Saturday (KO 4.45pm) was announced this afternoon as the big Donadea man , who had been performing so well in the green shirt, was ruled out with a knee injury picked up in training. 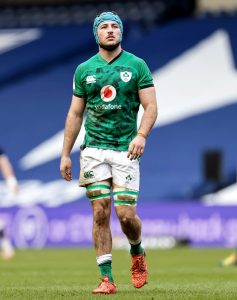 Better news, though, for the other Kildare man, Tadhg Beirne, Man of the Match in the last two internationals, as the Eadestown man has been selected by Head Coach, Andy Farrell in the second row as partner to Iain Henderson, and he will win his 22nd cap.

Captain Johnny Sexton is joined in the halfbacks by Conor Murray and Bundee Aki slots in at inside centre with Robbie Henshaw shifting to the No.13 jersey. Jacob Stockdale is named on the left wing with Keith Earls on the other flank and Hugo Keenan at fullback.

Dave Kilcoyne is named at loosehead alongside Rob Herring at hooker and Tadhg Furlong at tighthead. CJ Stander, who recently announced his retirement from Munster and Ireland, has been selected on the blindside flank, Josh van der Flier at openside with Jack Conan at No.8.