THERE is a strong Kildare/Naas/Clane RFC representation on the Leinster team to take on the Ospreys in the PRO14 in the RDS on Friday night with two players starting and a third ready to be sprung off the bench. 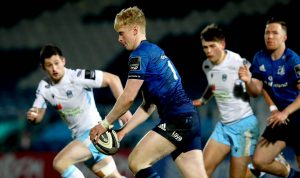 Jamie Osborne is selected at centre by Head Coach, Leo Cullen, while his cousin, Rowan is in a scrum half. Clane’s Marcus Hanan will earn his third cap if, as expected, he is to see some game time off the bench.

Jimmy O’Brien and James Tracy have not been included in the Match Day 23 as Leo Cullen keeps an eye on the next weekend’s Final against Munster.