Saturday Night Is Fight Night For Katelynn and Eric

GARY Cully’s fight, and victory, last Friday night, was the start of a festival of boxing for Kildare pro boxers with Katelynn Phelan and Eric Donovan in Luxembourg and Brussels, respectively, this Saturday night and Kilcullen’s Denis Hogan in the ring in faraway Newcastle, Australia on 31 March. (More about Hogan’s fight in the Nationalist on the week after next)

In this week’s Kildare Nationalist we got the reaction from both camps as we previewed Saturday night’s fights.

ST Brigid’s BC’s Katelynn Phelan, who is also coached by Niall Barrett as well as her father, Paddy, takes on Polish Champion, Karina Kopinska, who has fought Katie Taylor among other top names in the past. 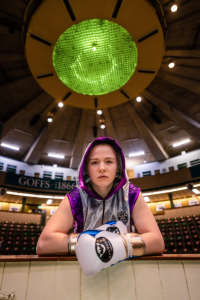 Kildare’s triple World Champion will fight down a weight for this one but she told the Kildare Nationalist this week. “I am very excited to fight down at my new weight. I did everything right and was smart about getting the weight down”

“I am very confident in myself because I put in the hard work and I do everything a professional athlete should do. This fight is another step up in my career and I will show everyone that I am made for big fights,” she added.

“Karina Kopinska is very good and she’s very experienced. I know she will come and will try to win which makes me even more excited to show what I can do. This is a very important fight in my career. Building my record against good names and experienced fighters shows I’m not afraid to take on challenges and that is how you get ahead in life,” Katelynn concluded.

“According to Niall Barrett, Phelan’s preparation has been excellent for Saturday night’s fight. “Katelynn is showing improvements in all areas compared to her last fight. She has improved her boxing skills and is also running faster and lifting heavier than ever before so we are very confident that her preparation will translate into a great performance”

“I think the new weight will really suit Katelynn. Her first few fights came against heavier opponents but I think her punches will have more of an effect against opponents who are closer to her natural weight.”

“You need to have five fights to get a European ranking so after this fight Katelynn will be ranked quite highly in the Light Welterweight division. We then hope to climb the rankings and challenge for the European Title in about 12 months,” Barrett concluded.

ERIC Donovan takes on English man, Jamie Quinn over six rounds in Charleroi, Belgium, also on Saturday night. Donovan’s EU title fight was due to be against Haithem Laamouz but the Maltese fighter has tested positive for a banned substance and be replaced Marion Alfano of Italy with the Purse deal due by the end of the month and the title fight due in May or June. 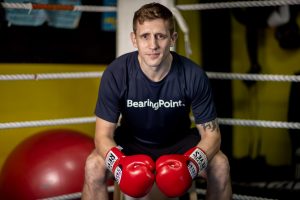 “Quinn is a well-travelled journey man who has only been stopped three times in over 100 fights and he has been in with established pros like Anthony Cacace, Zelfa Barrett and Sam Bowen,” Eric told us this week.

“My Manager, Mark Dunlop, wanted this fight for me so as to get in a good six rounds of boxing. It will also give Packie (Collins, new coach) and I a chance to work together. We haven’t got a chance together yet in a real fight situation”

“I’ve sparred 15/16 rounds with Belfast’s Paul Hyland Jnr, who is fighting on the 19 March for the British Lightweight British title. I have been training smartly and effectively and at 35 I know I’m probably into the last 12/18/24 months of my career so give I have to give it one hell of a shot,” Eric concluded.

We wish both Katelynn and Eric the Very Best of Luck on Saturday night.