New Lakeview to be shovel-ready by Sept ’22 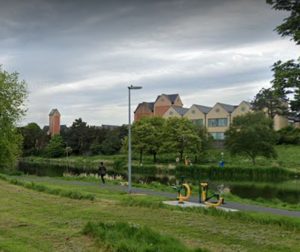 The Lakeview Unit at Naas Hospital

THE Health Service Executive (HSE) has confirmed it expects to apply for planning permission for the new €18.7m mental health facility at Naas General Hospital before the end of September, and to start building it 12 months later, however, this is still without having secured the capital funding required to do so.

It was originally hoped that permission would have been sought as soon as the end of this month, but pandemic constraints on the construction industry have put this back at least half a year.

In a reply to a request for comment from the HSE following its release of an internal report two weeks ago that said the Lakeview unit as it is is not fit for purpose, a spokesperson confirmed this before revealing the dates.

“The premises of Lakeview have been considered noncompliant for several years due to the limited space in the unit and in communal areas, [and] a replacement for Lakeview has been made a priority,” she said.

Following further consultation and reviews into other recently designed modern and purpose-built mental health facilities, a number of central design changes were suggested by the Mental Health Service to HSE Estates in late December 2020,” she said.

“The design team has incorporated features such as access to garden courtyards and terraces, and creative use of natural light to create a healing environment,” she added.

“Upon completion of the design phase it is expected to apply for planning permission in Q3 2021 and construction to commence on site in Q3 2022, subject to the availability of capital funding,” she confirmed.

The Mental Health Commission report of the 2020  inspection of Lakeview Unit as reported on by The Nationalist two weeks ago, found the unit to be compliant with 30 of the areas of inspection, up from 23 in 2019.

“Since the inspection the service has put in place corrective and preventative actions to address the remaining seven areas of non-compliance,” she said.