IT’S five not out for Kildare’s Katelynn Phelan, Ireland’s youngest boxing professional, as she out fought, out witted and out pointed Polish Champion, the very experienced, Karina Kopinska, in the appropriately named “Back to Business” Boxing Card in Luxembourg on Saturday night. 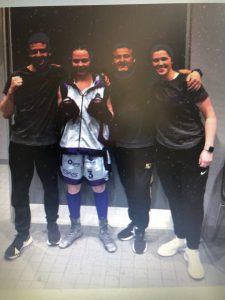 The fight may have been somewhat of a contest for the first two rounds of eight after which Kopinska was full of running, except that she was running away from the 20-year-old St Brigid’s BC boxer.

The build up to Phelan’s fight and that of the other Irish fighters was fraught with many difficulties as Katelynn’s Coach, Niall Barret of Unit 3 Health and Fitness, Naas, told us after the fight.

“I am very proud of the performance that Katelynn put in, especially as it was under very difficult circumstances. We had problems with our flight, with our Covid Tests, our luggage went missing, five opponents pulled out in the lead up and Katelynn’s opponent threatened to pull out the night before the fight unless we paid her even more money. Despite all of this Katelynn stayed very calm and composed and put on a very mature performance in the ring.”

Phelan’s strategy was to impose her strength on Kopinska early on and to take her confidence away. “Hope is a huge energiser and if you take hope away from your opponents they crumble. Once this was established the plan was to start throwing more body punches to take Kopinska’ s energy away. Katelynn could relax and start working on the new skills she has been developing in the gym,” Barrett added.

Such was Phelan’s dominance in the fight many watching were expecting a knockdown however Niall Barrett saw the fight differently. “It is very important for your career development to get rounds under your belt. I know how fit Katelynn is but now she knows for a fact that she can go eight rounds at a very high tempo and can keep her shape and concentration throughout. Eight rounds against an experienced veteran like Kopinska were invaluable.”

“Katelynn conditioning sessions at Unit 3 are gruelling and both she and Gary (Cully, the European WBO title winner two weeks ago) get more nervous before these sessions than they do before fights,” their Coach tells us. “These sessions stand to them in the ring as neither of them ever run out of steam and both fight at a very high pace.”

“Katelynn is still only 20 and has loads of time on her hands. I will do my best to keep the reigns on her and hold her back but it is easier said than done as she is very determined. We are planning to go to England soon to spar with some top-level boxers there and I think this will really help to bring Katelynn on even more,” Niall Barrett concluded.

Unfortunately, Eric Donovan’s fight in Belgium was cancelled at the last minute because of apparent logistical medical issues with opponent, Jamie Quinn, and because of Covid restrictions a late replacement could not be found.

The Athy native used his time in Belgium to observe the coaches as such a role would be on his mind for when he retires from the ring. In the meantime he awaits an announcement in about two weeks’ time which should be for his big EU title fight.

Saturday Night Is Fight Night For Katelynn and Eric