PICTURE the scene. 65 minutes into the Christy Ring Cup Final 2020 and Down have reduced Kildare’s lead to a single point.

Kildare Nationalist Reporter, Richard Commins, described it thus: “Kildare nerves jangled. Down were within a point and the spectre of extra-time reared its head. But when young substitute Cathal McCabe battled to win a 65, Sheridan stepped up to find the range….” 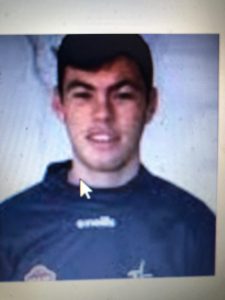 19-year-old Maynooth clubman, Cathal McCabe, Kildare’s 2019 Minor captain, takes up the story: “I didn’t get much time to think about it (going on as a substitute on 65 minutes) which probably helped. The last message I got from David (Herity) was “one ball, that’s all that’s needed”. Then a ball was hit up the line and I knew I was never going to physically win it. I wanted to put him under enough pressure to get the 65 or free for steps or to get him to mishit it over the line. Luckily he fumbled it over the endline to win a 65 and that put us two clear; it was a big moment in the game.” 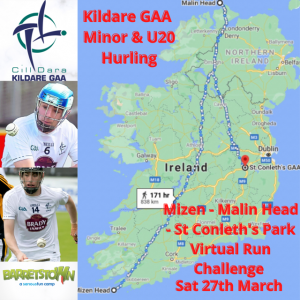 Cathal is on a one-year PLC Business Course in Dunboyne with the hope of doing Business Management in Maynooth next year. “It’s tough at the moment,” he explains, “as everything is on line.”

Although Mam, Hilary, from Glasgow, and Dad, Paraic, from Laois, are not steeped in hurling they were both heavily involved in Maynooth GAA which led to Cathal and older brother, Callum, taking to GAA at a very early age. Cathal took to the hurling while older brother, Callum took to the football. Younger sister, Moira, was a gymnast until a back injury curtailed her career.

Cathal has been involved with Kildare hurling since the U14 Development Squad and recalls that great run with the minors in 2019. “I was getting out of car in Conleth’s with Mam and an Offaly parent was parking beside us. He was on the phone and I heard him say, “We just have to get this game out of the way and focus on the Kilkenny game next week”. I realised no one was giving us a chance but we played our own game and I knew when it went to extra time, we would win it”

The match against Kilkenny the following week was “a big learning experience for Cathal and his team mates but “we all learned a lot from the game.”

Playing well with the club during the Kildare Championship 2020 earned a call up for Cathal McCabe to David Herity’s senior county squad. “I didn’t think anything of it at the time. I was using it as a trial and to get myself involved for the 2021 panel but every trainng session I seemed to get better and David decided to keep me on the panel for the championship,” McCabe says.

Then came inclusion in the Christy Ring Cup Final squad. “It was unbelievable. I only found out on the Thursday or Friday but since I was a little boy, I wanted to play in Croke Park. Then to be told I was in the squad I didn’t really know what to think. It was strange; no one there, supporters wise or family wise but once I got the warm up done that all disappeared,” he recalls.

“At the final whistle it was a bit of a shock. I didn’t know what to do at the time so I ran to the nearest person I saw and gave them a big hug. It was an unbelievable feeling winning an All-Ireland Final in Croke Park with your county. I don’t think anything tops that.”

Cathal is part of the Kildare Minor and U20 hurling squads, about 100 players in all, plus Management Teams, who, on this Saturday, will embark on a 12-hour Virtual Run from Mizen to Malin Head and then back to the home of Kildare GAA in St Conleth’s Park, Newbridge.

The Run will be an 840km Continuous Run between 8am to 8pm on Saturday.  All running will be completed within the 5km radius of each player’s home in line with government restrictions. The funds raised on the Run will be split between the running costs for both squads and the well deserving Barretstown Children’s Charity.

“Eoin Stapleton (Minor Manager) came up with the suggestion to help players improve themselves but also to give back to the community and people who need it most as especially during Covid they are not getting that much money.  It will also help our training budget as with Covid the GAA has reduced funding so it gives us money for our training fund. It builds team spirit and team bonding and it’s good to do something good for Barretstown,” Cathal McCabe declares.

“Each player will run 8km during an allotted time slot and our target is to raise €17,500. We have raised €14500 at present so it’s going strong and hopefully we get up and reach our target”, Cathal says.

A GoFundMe page, Mizen to Malin – Kildare Minor & U20 Hurlers, has been set up and Cathal McCabe and his team mates are hoping that Kildare supporters and Kildare people generally will support this worthy cause.