Jim Crawford and his Republic of Ireland U21 team begin their preparations for the UEFA Qualifying campaign with a friendly in Wales tonight. In this week’s Kildare Nationalist we carry a feature interview with Jim, who has been resident in the county for the last 20 years.

KILDARE resident, Jim Crawford, may have been born in the USA and baseball might have been his first love but football is his game and since the 5 April last year the future of Irish football is in his hands in his role as Republic of Ireland U21 International Manager. 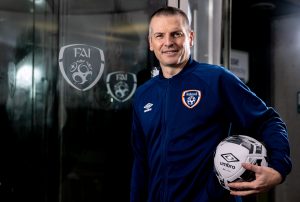 On this Friday night we get to look at some of that future Irish talent as Jim takes his charges to Wales for a friendly as a first step in the preparations for the next UEFA Qualification Tournament which begins in September.

Jim Crawford started his football career with Rangers in Terenure in Dublin who at times included on their teams such Irish internationals as Pat Byrne and Kevin Moran as well as rugby international and dual player, Tony Ward.

“The club always had great coaches who always instilled a passion or a thirst for football in all of us involved in their teams.  I always looked forward to getting out training and playing games with the club,” Jim Crawford told the Kildare Nationalist this week.

The former midfielder had his foray into League of Ireland football as an 18-year-old with Bohemian FC initially under Eamonn Gregg and Maurice Price and later under Turlough O’Connor where he played alongside such noted players as Pat Fenlon and Paul Whelan (Ronnie’s brother). Playing football week in week out under O’Connor allowed the midfielder to develop his game. “They were great years and I loved playing with Bohs,” he recalls.

Cross channel interest was attracted initially from Aston Villa and some lower league clubs before the opportunity came to sign for Newcastle United under Kevin Keegan.

“One minute I’m looking at players on Match of the Day like Peter Beardsley, Rob Lee, Barry Venison and Paul Bracewell and the next thing I’m training with these players. It was an unbelievable experience. Andy Cole had just gone Man Utd and Keith Gillespie had just signed. There was a lot of hype around the club and the Newcastle fans live and breathe their football,” the Irish U21 Manager remembers.

“When we trained at Maiden Castle in Durham, we could have 4,000 watching us during mid-term breaks and I was only used to playing in front of crowds like that in the League of Ireland so it was fantastic.”

“But there was real quality there at the time and they made such signings as David Ginola, Alan Shearer and Dave Batty as well as homegrown youngsters like Lee Clark, Steve Watson and Steve Howey so I had to take a step back and wonder if I was going to get into the team.”

“I did make the bench a number of times but if I had it all over again I’d say maybe it was too big of a club for me at the time and I probably needed to step down and go to a Championship club and get games that way,” he says.

Crawford did go on loan to Rotherham United and others before returning home to Shelbourne where the “tough love” of Manager, Dermot Keeley, later Kildare County Manager, helped him recover from any disappointment he might have felt.

Would his advice to young Irish players be to try the lower UK leagues rather than aim for the Premier League we wondered?

“Every case is different and it’s not a case of one size fits all but I do feel that players need first team experience and to step away from development football. They need to smell a dressing room where you need to win and the three points is everything.”

“You only to look at group with the U21’s last year and how quickly a lot of them have developed. Aaron Connolly stepped in and is playing first team football, Jayson Molumby went out on loan and look how much he has improved and that proves if you play first team football you’ll develop.”

Crawford looks back on his time philosophically. “I’m not going to lie and say that I didn’t feel that I achieved anything in England. I wish I knew then what I know now with regards to rehab. As soon as you felt you were good and ready after a hamstring injury you were thrown back into the first team training at really high intensity.”

“That wouldn’t be deemed to be correct nowadays. I came back and yeah, a little bit disappointed but I knew that this was the next step on my journey and I came back to a really good Shelbourne team with Richie Baker, Pat Fenlon Paul Doolin and Pat Scully as well as Tony McCarthy, and Owen Heary, players of real quality. Seasoned pros with numerous medals.”

The now Irish U21 Manager got his first taste of coaching when Pat Fenlon asked him to look after the Shelbourne B Team a few times so he started thinking of his Coaching Badges and he participated in the first even FAI/PFAI Coaching Course.

The Kildare resident has been involved in international football for ten years now as Assistant Manager or Head Coach and he says he reflected on and learned from every training camp he was involved in during that time. He agrees that there is a lot more pressure as U21 Manager but he is enjoying the role.

He is adamant that the U21 team should have a lot more ambition than just being a source for the Irish senior team. “Yes, it’s important, first and foremost, that we are a source to the senior team and you only have to look back at the last year and nine players have been promoted to the senior squad from the 21’s. That’s as huge success, however you’ve got to prepare players here to win games. You’ve got to qualify for Tournaments and deal with the pressure that goes with that so players have to learn and to respond to the pressure,” Jim says.

“We had some big pressure games last year, away to Italy, home to Iceland, and there was a hell of a lot riding on those in qualifying for the European Championships. Playing these games or in a European Finals helps players develop and gives them a barometer as to where they are at and then they can identify where they need to get to as an individual. That’s why I’m desperate to get there (to a Finals),” he adds.

“I couldn’t be happier for Troy Parrot, Jasion Knight and Dara O’Shea in making the step up to the seniors and I said that to them when they were in camp and that’s what the U21 grade is about but second to that it’s about qualifying for Finals. We’ve moved from Pot 4 to Pot 3 in the Qualifying Draws but let’s get to Pot 1 now,” the Manager urges.

The next UEFA Qualifying Tournament starts in September so preparations start with the friendly in Wales on Friday night and Crawford is also hoping to include the summer Toulon Tournament in his preparation plans also.

Included in the 22-man squad for the Wales friendly is Kill resident, Andy Lyons, the Bohemian FC full-back.

Jim Crawford has been living in Ballyshannon in Kildare for the past 20 years, since his return from England, along with his wife Samantha, who picked the house, and his children, Olivia, James, Grace and Isabelle. “The people in the area are fantastic and it’s a thriving part of Kildare with lots of good things happening there,” the new Lilywhite enthuses. “The neighbours are all sporting people and we have good conversations on GAA, soccer, rugby and horseracing.”

Son, James, is well known on these pages as he plays with Klub Kildare in the National Underage League. “James loves Klub Kildare and Jamie Smith and Pat McNally are really good. There’s a good set up there. I certainly don’t put any pressure on him as I have seen some parents put undue pressure on their kids. After games I would ask him what did his Manager say but I wouldn’t be dissecting his performance. I’m happy with the coaches that are looking after James,” the proud father says.

Will we see a Kildare County team in the League of Ireland again? “I’d like to see it certainly and there are more and more like myself who have moved here with kids and families. It didn’t happen for them the last time but if they can learn from the mistakes and then say let’s make this work,” Jim thinks.

We wish Jim every success in his UEFA Qualifying campaign.