Our Children Need An Outlet – The Supporter

In this week’s Kildare Nationalist Sport, our columnist, The Supporter, bemoans the lack of physical activity for children during continuous Covid – 19 lockdowns.

“YEAH, there’s a smell of fresh cut grass and it’s filling up my senses

There’s a lot more loving, yeah, left in this world”

Don’t go, don’t leave me now, now, now. I haven’t finally cracked or taken to the wacky backy to get through this interminable lockdown. It’s just that the council have been out cutting the grass and that fresh cut smell always brings the Hothouse Flowers to mind. I’m old enough to have seen them live, in their pre-fame days when they were the Benzini Brothers. 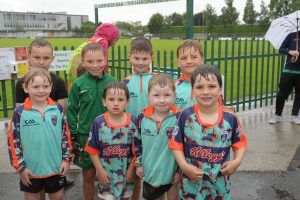 GAA Summer Camp at Sarsfields GAA in the summer of 2020 Photo: Jimmy Fullam

That was the mid-80’s when the economy was a mess and Kildare football was, well, not particularly good. Plus ça change.

Invariably, that smell (of grass, not live concerts, a whole other scent altogether) takes me back to childhood summers on the gaelic fields of the county. I was a cerebral footballer. Not in the sense of Maurice Fitzgerald, Peter Canavan, or Ciarán McDonald. More that I played a good game in my head. If only I could have translated that to my feet and hands once in a while.

My career, such as it was, fizzled out after under-21’s, the chore of traveling home in midweek and the increasingly frequent curly finger gesticulating in my direction forty minutes into another unproductive outing precipitating the decision to quietly slip away. I wasn’t quite the forerunner of the non-scoring wing-forwards of today, covering every blade of grass and slotting seamlessly into the defensive shield when out of possession. I managed the non-scoring bit. Just not the rest of the job description.

I would have loved to have been the next Jack O’Shea, Mikey Sheehy, or Tommy Carew, but despite not fulfilling those dreams I only have positive thoughts for the amount of my youth spent running around those fields. Competitive sport not only gives pure enjoyment to children but I believe it gives them a desire to achieve something and that this translates to later life. Not to mention the friendships made, learning to cope with adversity and the value of teamwork.

Most importantly, it lays a foundation of good physical and mental health that gives them a great start in life.

It’s six months now since our children were able to play any collective sport. That’s on top of the disruption they experienced last year. While plenty will be taking some sort of exercise – I expect athletics to experience a boom here over the next decade – it’s not inconceivable that many youngsters will throw in the towel when it comes to team sports. In particular, those with other commitments such as Leaving Cert or college.

Some will have missed out completely on representing their schools in the senior cycle. As you may have gathered above, I was not a star player by any means, but among my proudest achievements was breaking into the school teams in fifth and sixth year having never considered myself good enough before that. They were not stellar years for the school but that’s not the point.

Now that our children are back in school, or due to go back after Easter in the case of some, we really need to lift the restrictions on them playing sports. Whatever about club or county, there has to be some outlet for low-risk, team-based exercise in the schools. It broke my heart a few weeks ago when the Kildare GAA Games Promotion Officers thought they were all set to go back into the schools to re-start coaching only for the plug to be pulled.

Restrictions are a necessary evil, and, while frustration is inevitable, it pains me to see the cracks (and crackpots) starting to appear in society as government and NPHET try not to “lose the dressing room” as we head into year two.

But our children need the outlet, and it is imperative that the GAA and other sports bodies push for the re-opening of collective training (if not games) for teenagers who, let’s face it, are congregating outside anyway on their bikes or on foot. Give them a ball or a hurl and let them at it. This should be a bigger focus than getting National Leagues started at inter-county level.

Isn’t it remarkable, therefore, that it is more than a quarter of a century since a new GAA club was formed in the county? That was Confey in 1989, at a time when significant housing development was occurring in that part of Leixlip. Granted, Kildangan re-emerged in 2001 after folding in 1980.

Our County Town, Naas, has one GAA club. You could say that they are doing wonders for the town’s youth over the last decade or so, and the success has followed, at least at underage and in hurling at adult level. But is one club enough for a town the size of Naas with a population of over 20,000?

Celbridge has one club to serve 19,500 people, Maynooth isn’t far behind in size. One club. Indeed, if you take the top five urban areas in the county, they account for a population of 95,000 and are served by only seven GAA clubs.

Are two clubs even sufficient for Newbridge? Both are extremely well-run and powerful, incredibly successful at adult level and cater for hundreds of kids. But with the highest population in the county, is there room perhaps for a smaller, newer club to provide another outlet for potential players, including adults or older teenagers who might be put off by the size and strength of the established duo?

Naas surely is crying out for another club. Of course, it’s not really in the interests of the existing Naas, Sarsfields, Moorefield, Celbridge or Maynooth clubs to get involved in setting up newer ones.

The GAA at county level (or perhaps at central level as this is not just a Kildare issue) should perhaps set a maximum size for clubs and aid / encouragement for communities to develop newer outlets for their burgeoning populations.

The Kildare GAA strategy document talks of larger clubs having “difficulties coping with the influx of new members and lack of space, resources and personnel to deal with the large numbers.” It is light on specific actions that are being taken to address that, however.

Like Nero (the Roman emperor not the coffee shop), are we fiddling while Rome burns?

The Supporter Column appears in the Kildare Nationalist each Tuesday and is in your shops now.