ATHY primary school teacher Michael Egan’s first book, Declan Kirby GAA Star: Championship Journey, which is published by Gill Books is now available to buy. Egan says that the book is available to buy from many stores including instore from Easons, books.ie, Dubray, Bookcentre and all good book shops as well as some SuperValu stores. 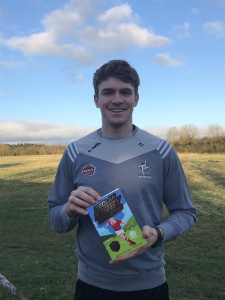 Egan delighted with the huge amount of Gaelic stars who have agreed to help with promotion including Philly Mc Mahon, Tomás O Sé, Stevie Mc Donnell, Andy Moran, Kevin Feely, Paddy Bradley, Noelle Healy, Mark Mc Hugh, Eoin Cadogan, Kieran Lillis, John O’ Loughlin, Shane Curran, Benny Coulter, Evan O’ Carroll, Gary Sice , Colm Begley and Gareth Dillion. Rory O’ Connor of Rory’s Stories has also agreed to help with promotion. ‘The message was resonating with the players when I was speaking to them and they were delighted to back the message which to is get more children reading and involved in GAA clubs,” Michael Egan said this week.

In addition Marie Crowe who hosts the show Game On on 2FM will also be giving away a book on her show in the coming weeks.

The book has been kept tightly under wraps until now but one man who has read it is the principal of Scoil Mhichíl Naofa school in Athy, Co. Kildare, Seán Hourihane.

The Principal said, “Fantastic. Enjoyed reading it. The kids will love it. A little teaser in every chapter as well as experiences children will relate to keep you interested. It flows really well. The short chapter works very effectively.”

Michael Egan adds, “Anyone that knows me knows that I’m fairly sociable and I’d love to be around to sign books but I spoke to the PR team and a formal launch is totally out due to all the Covid restrictions but nevertheless we’ll get the word out there and hopefully people will back our message.”

Gill Books Commissioning Editor, Sarah Liddy said, “We are delighted to be publishing these brilliant books. Michael has created a wonderfully realistic world around Smithgreen GAA club with a great cast of characters.”

The first book, Championship Journey,  follows the trials and tribulations of Declan Kirby and his team at Smithgreen Gaelic football club, a recently formed but promising GAA team. Although they have a talented team, there are problems beneath the surface – will their temperamental star player Dereck produce the goods when it is really needed? Meanwhile, someone seems to be hatching a secret plan to have the manager replaced, just when they need him the most. Declan also carries a secret wish – that his dad will once again come and see him play. Maybe if they make the championship final his dream will come true?

In the second book, Away Days, Declan Kirby can’t believe it when he’s selected for the county team. What’s more, a few of his Smithgreen teammates are chosen as well. Declan and his friends band together to try and win an All-Ireland underage competition and travel to Galway where they find out all is not what it seems.

Author Michael Egan concludes by saying,  “I hope that my books will get reluctant readers in particular excited about reading. Sometimes you have children who are very active. You give them a football or a hurl and sliotar and they’d be out the back for an hour, but to get them to read for 20 minutes can be sometimes be difficult. But if you can create a subject matter that they are interested in that is going to hopefully be a vehicle for parents and teachers to get children to read more.”