We spoke with Dennis Hogan before his fight in Australia on Wednesday and we carried a feature on the Kilcullen man in this week’s Kildare Nationalist. The fight is at 9am on Wednesday morning, Irish time.

KILCULLEN’s Dennis Hogan, the man they call “The Hurricane” has been living in Australia for some eleven years now but he hasn’t forgotten his Lilywhite roots. He lives in Brisbane now with his partner and two daughters now. 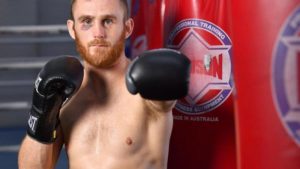 “I do miss Ireland,” Dennis told the Kildare Nationalist. The thought of just being at home and just being around Ireland and seeing everyone is a beautiful thought. The trip from my home in Kilcullen to Inistioge in Kilkenny, where my partner is from, is a beautiful one. I still love living here but Ireland is always in my heart.”

Dennis, now 36, will take that big heart of his into the ring in Newcastle, New South Wales, on this Wednesday as he faces, Tim Tszyu, the undefeated 26-year-old local favourite.

“The fight is in Newcastle as Kostya Tszyu, Tim’s Dad, the former light welterweight world champion, had about seven or eight fights there in his time and he used to sell it out. The people adored Kostya, he was their man and they are trying to emulate that by bringing  Tim here and doing the same thing but I’ll have something different to say about that,” Dennis promises.

The younger Tszyu has been a bit “mouthy” in talking up his chances for the fight but that doesn’t faze The Hurricane. “I don’t believe he really believes the words that he is saying. Talking all day doesn’t really help anyone. It’s what you do in the ring that matters. You go in there, go hard and do your best.”

Wednesday’s fight, titled the Steel City Showdown, comes almost two years since Dennis fought Jaime Munguia in Monterrey, Mexico, and to everyone’s eyes, except those of the ringside judges, the Irishman won the fight. It was one of the greatest travesties of justice in boxing history. Wednesday’s fight also comes some 15 months after the Kilcullen man stepped up a weight to fight WBC Champion, Jamall Charlo in Brooklynn where he again performed well before succumbing to a seventh round TKO.

There was further disappointment for “The Hurricane” in December when a fight he had lined up against Julian Williams on St Stephen’s Day was called off as his opponent tested positive for Covid – 19.

Hogan doesn’t look back on that Monterrey decision with any despondency. “The whole world could see that I was robbed in that fight and when I was in the US for the Charlo fight people would say “you’re the guy that got robbed by Munguia”. So I’m saying, is that going to be my story or am I going to be the guy that it happened to and came back and won it again That’s how I look at it and I enjoy the challenge of it all.”

“Against Charlo I stepped up in weight to fight the No 1 middleweight currently but it’s always been in my head to take the best opportunity at all times.”

For the past while Dennis Hogan has been coached by Wayne McCullough, the former WBC bantamweight title holder and Olympic silver medallist. The so called “Pocket Rocket” won’t be able to travel over for Wednesday’s fight but that hasn’t interfered with preparation for Wednesday’s fight.

“No Wayne won’t be over for the fight,” Dennis tells us but we are in constant contact. I have an excellent Assistant Coach here in Stephen Edwards and he and Wayne get on very well. We record the sparring sessions and put them on a group message.  Wayne then gives his input and we work on these for the next sparring session.  Preparations are going really well.”

He did have to step out of the ring for a very short time because of an injury scare which Hogan takes on the chin, so to speak. “These things happen in boxing and I don’t think I have ever gone through a camp without some sort of an injury but it’s how you deal with those injuries that matters. I’m absolutely in flying form now,” he tells us.

Hogan will return to his super welterweight category of 154 for the Tszyu fight and says he is actually weighting in better than the Munguia fight in Monterrey when he put up that great performance.

Dennis Hogan is hearing that a big Irish crowd is expected to travel to Newcastle for Wednesday’s fight although he has concerns that it is a midweek event. The fight is on Wednesday night for TV purposes as boxing is not one of the top tier sports and doesn’t go up against cricket or one of the other big sports at the weekend.

“It makes it harder for some people to travel midweek but look, one Irish person will out-shout 20 Australians anytime,” the Kilcullen native says enthusiastically.

Hogan is now eleven years in Australia having, as he says, been forced to leave Ireland to follow his professional career and that wasn’t possible in recession hit Ireland at the time. He had boxed in Australia in the past and was invited over again with the promise that if he arrived by the January, he’d have a fight by St Patrick’s Day. The rest, as they say, is history.

“I didn’t have it in my mind that I was staying here for good but that’s what happened and I love it here now,” he adds.

On the possibility of victory in Wednesday’s fight leading to a WBO title fight Hogan is adopting a wait and see policy. “I presume I’m going to get that position after this fight but Tszyu does have a rematch clause so I’ll have to beat him again if he wants,” Dennis Hogan laughs.

Hopes for 2021, Dennis? “I hope to be World Champion by the end of 2021 or if not to be mandatory for it,” the Kilcullen man proudly declares.

We all send the best of Lilywhite Luck to Dennis for Wednesday’s fight.