Ladbrokes Double Down with Dual Feature Deal at the Punchestown Festival

LONGSTANDING Punchestown Festival supporters Ladbrokes have today further extended their backing at the home of Irish jump racing with a double header deal that will see the leading bookmaker add the 2021 Punchestown Gold Cup to the their continued sponsorship of the Ladbrokes Champion Stayers Hurdle. 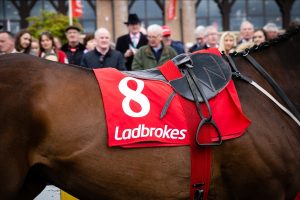 Ladbrokes have been the title sponsors of the Ladbrokes Champion Stayers Hurdle at the Punchestown Festival since 2008 and that is set to continue when the flagship Festival returns from 27th April to 1st May. A new addition to their impressive racing sponsorship portfolio will be the €250,000 Ladbrokes Punchestown Gold Cup on day two of the season grand finale event.

This news will see Ladbrokes sponsor the two championship three mile races at the Punchestown Festival and the two highest rated horses in the respective three mile divisions are on target to go to Punchestown.

Meath Trainer Gavin Cromwell has already earmarked the Grade 1 €250,000 Ladbrokes Champion Stayers Hurdle at Punchestown for his newest stable star Flooring Porter who was an emphatic winner of the equivalent race at Cheltenham, while the third home that day was Paisley Park and his trainer Emma Lavelle has also mentioned Punchestown as a potential target for the three time Grade 1 winner.

Trainer Gavin Cromwell said: “Punchestown is definitely the aim for Flooring Porter. He’s good. He came out of Cheltenham fine and is back in full work. We’re happy with him so all roads lead to Punchestown.

“It is really just about getting him back in the routine. He’s obviously very fit so it’s only a matter of ticking him over, but it doesn’t take very much to get ready.”

Flooring Porter earned a rating of 165 equal to the two mile champion Honeysuckle and not even a late change of rider due to injury could deter Flooring Porter from a career best at Cheltenham.

“It was a huge shame for Jonathan Moore but he is a big part of the team,” Cromwell continued. “We’re optimistic Jonathan will be back from injury to renew his partnership after Danny Mullins filled in so well at Cheltenham. He’s still quite sore at the moment but will hopefully be fine by the time Punchestown comes around.”

The last renewal in 2019 of the now Ladbrokes Punchestown Gold Cup was certainly a historic one as it marked the end of an era for racing as Ruby Walsh retired following his victory in the race on Kemboy and already punters are counting down the days to 28th April to see Cheltenham Gold Cup hero Minella Indo return to home soil for a potential rematch with Al Boum Photo.

When Gold Cup hero Minella Indo won at the 2019 Cheltenham Festival he followed up with success at the Punchestown Festival and his trainer Henry De Bromhead is hoping the Barry Maloney-owned eight-year-old will once again return to the County Kildare venue.

De Bromhead said: “It was a hard race, as you would expect, and A Plus Tard pushed him all the way but he seems to be good since. Like all the horses that ran in Cheltenham, we will give him as much time as he needs and just see how he is before getting going again but we would hopefully be returning to Punchestown with him.

“He won the Grade 1 three-mile novice hurdle at the festival two years ago, following up from the Albert Bartlett at Cheltenham, so he does like it around Punchestown. We will see how he is and discuss it with the Maloneys but there is a good chance at this stage.”

With his team in top form at the moment, De Bromhead expects to have a big team heading for Punchestown.

“We will hopefully be going to Punchestown with a strong team,” confirmed the Waterford trainer. “I would like to do that but we will have to see how they are and talk to the owners. But they are in good form at home now and we will only pick things up again when they are ready. When that happens will determine which of them will line up but we are hoping that many of them will be there.”

Adrian Osman, Ladbrokes Head of Sponsorship, said: “Ladbrokes has been a committed and longstanding supporter of Irish horse racing for many decades and we are thrilled to be taking such a leading role at the Punchestown Festival with sponsorship of these two fantastic Grade 1 races.”

Entries for the 2021 Ladbrokes Punchestown Gold Cup and the Ladbrokes Champion Stayers Hurdle along with 10 additional Grade 1 races will be available from Monday 12th April.