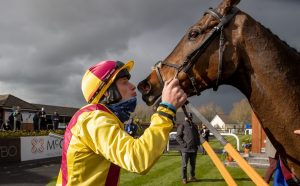 Freewheelin Dylan, a nine year old, trained by local trainer, Dermot McLoughlin, the winner of the Midland’s National in Kilbeggan last summer was an almost flag to post leader of the three mile five furlong trip, on the instructions of his trainer, and he returned home a 150/1 complete outsider  winner.

Although born in Dublin Ricky Doyle and his family moved Kildare town just over 20 years ago as his father transferred to the Army in the Curragh.

Doyle became friends with Conor Brassil, son of local trainer, Martin, whom he went to ride with in fifth year. He spent some with Willie McCreery before returning to Martin Brassil’s Yard.

Currently Doyle is with Conor O’Dwyer, in his Blackmillershill Yard in Kildare, where he is described as a great worker, a jack of all trades, mucking out, driving the truck.

Monday’s Grand National was the biggest race victory of his career. After the race he told RTE TV, “I was trying to hear the lads snapping behind me and I’m thinking, no way am I going this easy in an Irish National, I couldn’t believe it.