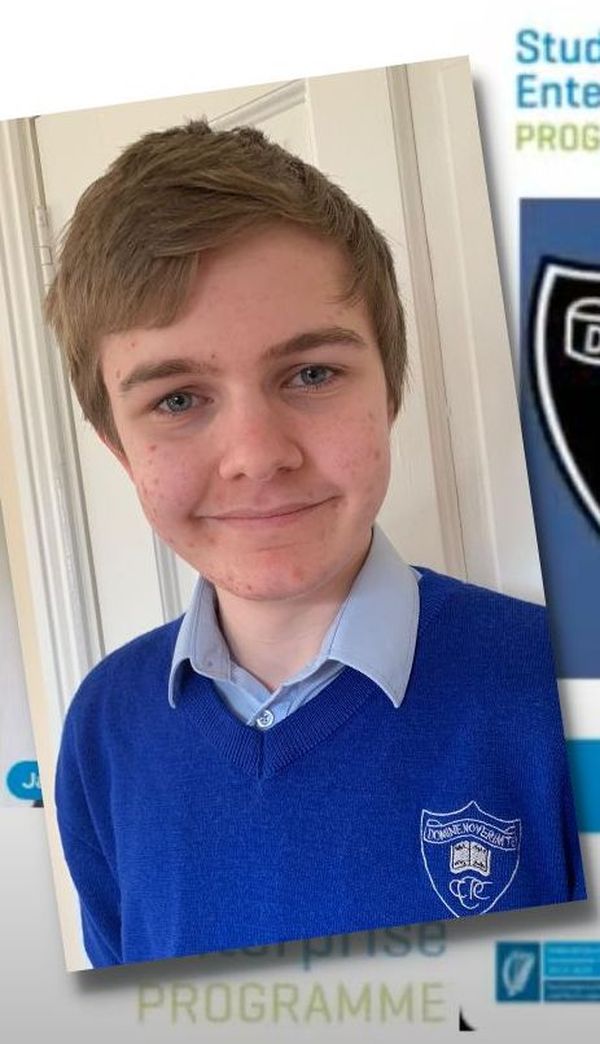 Cathal Stein who, with his friend Tadhg Conroy, was a winner of the innovation award

Their initiative was based on a plan to save their school a substantial amount of the cost of keeping CPC Covid-free, by replacing disposable cleaning products with reusable ones. Though the lockdown closure of the school made it impossible to carry through the idea, it still won for them the Innovative Eco-Friendly Initiative Merit Award sponsored by Kildare Co Council.

“It’s something we feel very strongly about, protecting our communities and environment, and creating a more sustainable future for all of us to live and grow in,” Ms McNabb said during the online county finals of the 2021 Student Enterprise Programme on 25 March. “This is championed by our Chief Executive, Peter Carey, and Conroy Cleaning Products really answered that call.”

Cathal Stein outlined the project he and Tadhg Conroy came up with as replacing the throwaway wipes being used to keep desks and other surfaces clear of coronavirus with ones which could be washed and reused. “Desks have to be disinfected after every class, which involves lots and lots of paper towels. This is very detrimental to the environment, so we thought it would be preferable to source reusable materials and sell them to each pupil.”

The idea was that the reusable wipes could be brought home by the students and run through the washing machines along with the masks that had to be washed each evening. In addition to being a more sustainable practice, ‘it would cut down on carbon emissions further up the line’. The pair planned to source their reusable materials from China, and as part of the business plan they developed with their Mini Company, they had identified potential suppliers. They say they did try and source their products in Ireland, ‘obviously we wanted to support local, but we found it very difficult to find what we wanted here’.

In their research, they had spoken with the school’s deputy principal Fiona Lennon, who showed them a ‘room full of paper towels’ brought in for the covid cleaning programme. “They were coming in in crate-loads, and our idea would have cut the cost by a very significant factor,” Cathal says. “Our price to the school for the reusable wipes would have been about €1.50 a unit, and we figured that each one would last for a school year.” The pair iinitially they thought the school could give the wipes to each pupil, ‘but people don’t appreciate anything they get free, so we were suggesting the school distribute them at a nominal cost’.

When it came to the County Kildare Student Enterprise competition, Conroy Cleaning Company was one of four submitted by their TY teacher. “We were lucky enough to be selected out of that four.”

While the school closure since Christmas has meant they couldn’t implement their plan as a real business, Cathal is hopeful that after Easter they may get a chance to do so, even if for a very short time. “Though realistically there is so little time left for this year, so we might tray and have it in place for the next school year from September.”

Cathal says going through the process of developing the project gave him more self-confidence. “We gave it our best shot, and I think we came up with a really good project.” For Tadhg, the project made him much more aware of the complexity of business. “For instance, we had to go through five different companies just to get one product in place, with sourcing, packaging, getting logos and such. There’s a big difference in coming with an idea and saying ‘that’s cool’, and then having a product that you could bring to the school board’ with pricing, costs, and all that.”

Cathal lives in Calverstown, and Tadhg is from near Nurney