THE LGFA have published the Divisions and the dates for their 2021 Leagues providing a chink of light at the end of the Covid – 19 lockdown tunnel.

Daniel Moynihan’s Kildare have been grouped in Division 3B along with Laois, Longford and Wicklow. Judging by the reaction of Kildare players interviewed in the Kildare Nationalist in recent months the Lilywhites will be eagerly looking forward to the meeting with Laois as it was the defeat to the O’Moore County which put paid to Kildare’s advancement in the 2020 championship. 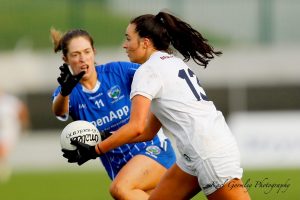 An added intrigue in the Division is the fact that Wicklow, who reached the Junior Final last year, are managed by Moorefield’s Mark Murnaghan with another Moorefield man, Niall Hurley Lynch as the in charge of S&C. Murnaghan managed Kildare ladies at underage level in the past.

The three rounds of the LGFA 2021 Leagues will take place between 23 May and 6 June with the semi- finals on 13 June followed by the Finals on 27 June. As you will see from the recent Government announcement that from the 19th April we as part of the Gaelic Games family can return to the following: ‘Training for and playing of National Governing Body sanctioned and organised adult inter-county National Gaelic Games Leagues not including under 20 or minor competitions’.

Making the announcement of the 2021 Leagues, Helen O’Rourke, CEO LGFA said “I have spoken with the Department in the last week to clarify this and it is only National Leagues they are talking about at the moment and no championships, challenges or underage competitions. At a meeting last Thursday night the Management Committee revised the National League groups to cut down on travel and limit the risk to counties for the coming league. Attached you will find the groupings and the National League Fixtures will follow in the next few days along with a return to play document and guidelines for counties with home fixtures.”

“We will hold a Central Council meeting via MS Teams on Thursday 15 April and hopefully by this time I will have further information on when we can run our championships and the return of other activity,” she concluded.