IN his latest column in this week’s Kildare Nationalist, out now, Niall “Slippers” Madden talks Aintree memories and predictions.

IT was the biggest race win of my career and as far as I’m concerned, it’s the jump race that every National Hunt jockey wants to win as they are growing up and throughout their career. I rode in the Aintree National on seven occasions and finished it five times. 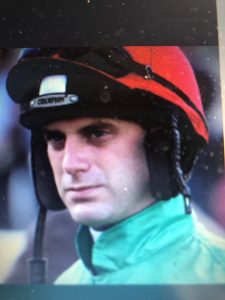 I actually have a good record in the race, winning it with Numbersixvalverde in 2006 and coming sixth on him the following year. I was seventh on Southern Vic for Ted Walsh and I was also sixth on In Compliance for Dessie Hughes.

I was lucky enough to win it and to win it with my first ride at the track so it will always stick out in my mind. I remember every little bit of that day from start to finish. I was only 20 at the time, one of the youngest to win it other than David Mullins, who was only 19 when he won it, and I think maybe Ruby Walsh was a few months younger than me when he had his success.

I travelled over on the Friday night with Dad (“Boots” Madden) but when we landed in Manchester it was absolutely lashing rain and I’d say I was the only man that was happy coming off that plane because I wanted slower ground for my mount, Numbersixvalverde, in the National on the following day.

I had a good night’s sleep that night and on the Saturday morning, Dad and I went to Aintree and walked the track. He had ridden the National a good few times, his best place was sixth on Attitude Adjuster. We talked through the race as we walked along, where was the best place I should be, inside, middle or on the outside track, where I should try to jump the fences. We also talked about where I could make ground and where I could give the horse a breather. Dad was very good with that kind of advice so I was delighted with it especially as it was my first trip around Aintree.

Then of course all your plans can go out the window and on this occasion in 2006, we had a false start. It wouldn’t be a Grand National without a false start! I actually had great position for the false start and I was thinking I’m never going to get this position again but lucky enough I did. It might be easy to say it now but everything did go to plan on the day although I worried, early on, that I was moving quicker than I wanted to go. I didn’t want to force him as he preferred finding his own feet in a race.

I remember when we were walking the track Dad said to me that if I was ten lengths off the leaders coming in at the elbow that I’d win because Numbersix stayed so well. When I turned in, I was upsides so after Dad’s words I said I’m definitely going to win, but I was still conscious that it is such a long run in at the end of the race.

I was anxious to get the rail when I hit the front at the elbow and when I got there, I gave him a little reminder and I knew nothing was going to get by us then. When I got past the finish line, I let a roar out of me and then the roar that came from the crowd was incredible.

We flew home that night as I was riding at Tramore the following day, and there was a congratulatory announcement on the plane and a round of applause from all on board.

It’s a day I’ll never forget, if only you could bottle it and sell it.

The Irish don’t have as big a team going to Aintree as we did to Cheltenham with Punchestown so close. We have two Grade 1 races on Day 1 on Thursday, the Aintree Hurdle and the Betway Bowl where Tiger Roll now runs and where I think he certainly has a big shout. He absolutely skated up in Cheltenham, winning by 18 lengths. He beat a horse that was in good form too in Easyland and he beat him easily.

The ground is drying out at the moment, which will help him and if the handicapper is right then he should be there or there abouts as he is going there a fresh horse. Cheltenham form is going to come into reckoning here but the English might get a few winners with less Irish horses going over.

We also have the Foxhunters on the Thursday and there should be a few Irish horses in that one too with Billaway for Willie Mullins, second in Cheltenham, a likely contender if he goes over. All the horses that ran in the Hunters Chase in Cheltenham should all be turning up again but at least the Amateurs are getting their day in Aintree and that’s their Amateur Grand National.

If I was to pick a Nap for Thursday, I would probably go with Tiger Roll. It’s a shame he’s not going for a third Grand National. I hope he puts on a good show and if he does win, they’ll realise then that the handicapper did get it right and maybe he should be running in the Gold Cup every year instead of the Grand National.

We have a few Grade 1’s on Friday including the Novices Hurdle which is the equivalent of the Supreme Novices in Cheltenham. Ronan McNally is bringing Dreal Deal over, I believe, which is an improving horse. He has improved 50lbs in all his runs. The horse that he beat in Punchestown last time out was placed in Cheltenham so he should have a good squeak.

Then we have the Topham Chase which is over the National fences, the first time that the pros get to ride over them this year at Aintree. The Irish have the first two in the betting in this one with Farclas for Sneezy Foster and Livelovelaugh for Willie Mullins. Willie’s horse has been over these fences before which is always a benefit so he might be the one to keep an eye on.

There are other good races of course on Grand National Day on Saturday but in fairness everyone will be gearing up for the big one at a quarter past five that evening. That’s the race everyone will be tuning in to watch whether you are a soccer fan, a Gaelic football fan or a hurling fan you’ll be sitting at home at 5.15pm to watch the Grand National. 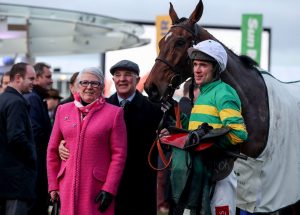 The Irish chances in the Grand National will include Burrows Saint who is an Irish National winner which is a great indicator before you go for an English National. He’s going over there with the form to have a big shout here on Saturday. Then we have Ted Walsh with Any Second Now, one of JP McManus horses. Ted has taken the same route with this one as he did with Seabass, winning in Navan over two miles, and he seems to like doing this shorter trip with his National horses before going over there. He jumps really well.

JP has a great team going over including Kimberlite Candy who has run over the National fences a few times and has run extremely well. Tom Lacey trains this one for JP, he’s an English trainer. Henry de Bromhead has Minella Times and there’s been loads of money for that one in the last few days. I presume Rachel Blackmore will take the ride on this one and that might make the price a bit shorter when people see that Rachel is on board.

Jessica Harrington’s Magic of Light, was placed behind Tiger Roll when the Grand National was last run in 2019 and she’ll have a big chance too. I read something in the paper recently which wondered if Jessica could be the first trainer to win the Grand National and a Classic in the same year. That would be brilliant to see.

Potters Corner is another one I give a big chance to, with a big price. He has been geared up for the National and was geared up for it last year too. He actually won the Virtual Grand National last year when they couldn’t run the real thing. Christian Williams is a very good trainer too and he has his horse geared up for this day.

Cloth Cap of course is the favourite for the National at the moment. He won the Hennessy this year and won it extremely well. He’s brilliant to jump and is a strong stayer as well so he’s entitled to be favourite. Jonjo O’Neill trains him and he has won a Grand National and Trevor Hemmings has an unbelievable record as an owner in the National. He won a listed race in Kelso last time out. He’s the one you’d like to ride in the race as he’s in proper form and has a good weight on his back.

I have to give a shout out to Kildare’s Philip Dempsey and a horse called The Long Mile. He was my last winner in Limerick before I retired so I’d like to think he’d have a good chance on Saturday for his owner JP McManus.

They’ve started to water Aintree at the moment because it is drying out that much and some people will obviously be happy with that, some people won’t. They have to make it as safe as possible and safety is top of the list when it comes to horse racing. Although they may not be quite as big as in former years, the fences are still big fences and the faster you go the more chances you have of getting a fall. So, they’ll water the ground to try and keep it a little bit slower.

Having said all of the above I think Cloth Cap will be the one they all have to beat and for a long odds, each way outsider I will go for The Long Mile which means a lot to me as my last winner.