In this week’s Kildare Nationalist, out now, we carry an interview with Milltown and Kildare LGFA player, Lauren Murtagh, who talks life, sport and tradition.

AH you all know him, the father. Irish Flat Racing Jockey five times. Multi major races winner here in Ireland, the UK, Europe, the East, Middle East and USA; classics in The Curragh, Royal Ascot and of course the Prix de l’Arc de Triomphe. He’s now a successful trainer on The Curragh in his own right. 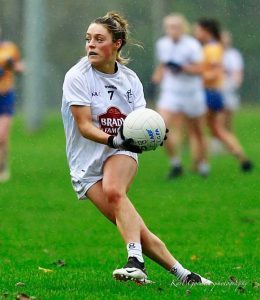 Sure, you know the grandfather as well. A dual footballer and hurler with Tipperary. He won two hurling All Ireland titles, four Munster titles, two National League titles and an All-Star Award. He also managed his native Tipperary (twice) as well as Galway, Laois and Offaly.

The Mam, Orla, is heavily involved in the GAA and in ladies’ football.

With that pedigree it’s no wonder that Lauren Murtagh, a second year Health and Performance Science student in UCD,  is making great strides in ladies’ football with her club Milltown and with the Kildare county team with whom she won an All-Ireland minor title in 2018. Her involvement with the UCD team in the O’Connor Cup was curtailed because of Covid-19 restrictions.

There are five kids in the Murtagh family, Caroline, Charles, Lauren and 16-year-old twins Grace and Tom.  Caroline was an apprentice jockey until she returned to college although she still rides out for her Dad. Charles in a rugby player with Belvedere, Tom plays rugby with Clongowes but has also been on the Lily Óg GAA squad with Kildare while Grace now plays ladies football with Milltown.

“It was absolutely hectic growing up in our family,” Lauren Murtagh tells us. “I have never met anyone so motivating and so encouraging as Dad. When he was a jockey, we never really saw him and he would have missed communions, confirmations and other family events but that was his job, his lifestyle.  I loved to go racing and seeing Dad. Now that he is a trainer, he’s around a lot more.”

Lauren didn’t really start playing football until she was about 12. “I was going to pony camps and football was never something I considered until I joined Milltown. Lara Curran advised me to go for county trials.  The only thing I had going for me at the time was speed.  I didn’t have that much skill then but I was fast and I got on the county panel but if there was a match on or the ponies, I used to prefer the ponies,” she recalls.

“When it came to U14 I was getting better and I started thinking, God I’m beginning to like this, so I went half and half as I was really into the eventing. I had to find a balance,” she adds.

Lauren’s Dad trained the Milltown ladies to a Junior “C” Kildare championship. “I loved him as a trainer and the girls loved him too. He was just so motivational, he was never quiet on the sideline, always encouraging. Even now as soon as I see him coming to a match or when I hear his voice, I know I need to focus here.”

“He and I are very similar, both very motivated and driven. When I came home from a match, he’ll ask me to rate myself out of 10. Grandad is also great. He’ll sit me down after watching one of our matches on TG4 and ask “why did you go there or why were you running for that ball”. He’s watching my running times now; It’s bit of pressure but I’m glad I have him,” Lauren says enthusiastically.

Lauren made the decision to concentrate on the football and that led to an All-Ireland Minor title with Kildare in 2018.

“I had a really poor year at U16 and I wasn’t getting a game. I wasn’t really giving it 100% as I was focusing on the ponies as well so I came into the minors with a real lack of confidence,” she explains. Her confidence soared when she was made vice-captain by Manager, Gavin Doyle, and she went on to win the Player of the Match in that Minor All Ireland win.

Five of that minor panel were called up to the Kildare seniors by Manager, Daniel Moynihan, and although she didn’t actually play, she sees the call up as a great learning experience for her.

Because of a knee ligament injury, which she received playing for UCD, Lauren didn’t play for Kildare in the League but returned for that disappointing loss to Laois in Championship.

“When you lose a match like that you do not want to feel like that again. It was a shock to us; we didn’t really know what a defeat felt like. Maybe it was our mentality on the day but it will make us hungrier for 2021,” she promises.

Although her Milltown team lost in the Junior “B” Final for the fourth time last year their aim is to get to into Junior “A” in 2021.

Lauren has found new ways of keeping fit during the lockdowns as in addition to the programmes from club and county she has been riding out for her father at 7am on Friday mornings and 7.30am on the other days.

“It’s fun and I work it in with my S&C,” she explains.  “I love the horses with Dad. It’s great to be part of the big team. Dad has been showing me skipping that he used to get fit when he was a jockey.  I’m figuring out different ways that suit me to get fit.”

Although her Dad is always asking when she is taking out her jockey’s licence Kildare LGFA are unlikely to lose Lauren Murtagh to the horse industry although she admits that she wouldn’t mind sampling the buzz of winning on a horse. She admits to being very competitive just like Dad, Johnny.

A big ambition however would be to play in the AFL just like her idol, Sarah Rowe of Dublin. In the meantime, though, Lauren is looking forward to getting back on the pitch again.

“I can’t wait to play a football match as I missed a lot of last year because of the knee injury. There will plenty of competition for places with Kildare so to get into the squad will be an achievement but to get a starting position will be the main aim,” Lauren concludes.