Deloitte Ireland today announced that it will become official partner to Team Ireland, signing a four-year deal to in a partnership to include three major Olympic Games. They also announce that they will add 300 new jobs in response to strong demand from Irish and international clients for business transformation and advisory services. Job opportunities will be in all areas of the Deloitte business including Audit, Tax, Consulting, Financial Advisory and Risk Advisory. 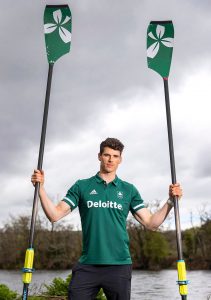 In addition to embarking on this significant recruitment drive, Deloitte Ireland is also announcing that it has signed a four-year deal with Team Ireland. It will be an official partner to the Olympic Federation of Ireland from now until the end of 2024. The deal will see Deloitte partner with Team Ireland for the Summer Olympic Games in Tokyo in July and the Winter Olympic Games in Beijing in 2022. In addition, it sees Deloitte as the first official partner for the Paris Olympics 2024. It also covers the Summer and Winter European Youth Olympic Festival, and European Games.

Commenting Harry Goddard said: “Like Team Ireland, we recognise the importance of developing talent, being resilient, highly motivated and working hard to be the best we can be. We also know that we can make a really important contribution not only to our economy, but also to our community and we are hugely excited about this partnership. On a daily basis, we see how meaningful collaboration with our clients can deliver success, and we are excited to be collaborating with Team Ireland as they look to develop the future stars of Irish sport over the next four years.”

Peter Sherrard, Chief Executive Officer, Olympic Federation of Ireland commented: “We are very happy to welcome Deloitte as an official partner to Team Ireland in the build up to the Paris 2024 Olympic Games. This is in keeping with our strategy to work with business to support the athletes and programmes of Team Ireland. The next three years will see Deloitte partner with us through two Summer and one Winter Olympic Games, as well as a host of youth and European events. I want to thank Harry Goddard and all of the team at Deloitte for their commitment to Ireland’s elite athletes who do so much to represent us internationally. The support and expertise of Deloitte on their journey is a great plus for Team Ireland.”

Over the last year Deloitte Ireland has made a number of strategic investments in its business. In May 2020 it acquired the leading Irish cloud consultancy and managed services business, DNM. In addition, ACNE, the creative consultancy acquired by Deloitte in 2017, officially opened in Dublin in 2020.

Cormac Hughes, Head of Consulting at Deloitte Ireland, commented: “Many businesses have been on a rapid digital transformation journey over the last year. Trends that were already in play – from the rapid pace of technological change, to the changing expectations of customers and the more diverse and agile nature of work – have been accelerated by the pandemic. As businesses look to a post-pandemic world, they have seen the value that technologies such as cloud, analytics and AI, and enterprise technology can deliver. We are partnering with them on their long-term transformation plans. We are looking for individuals who are passionate about driving positive change with our clients and the impact they want their organisations to make.”