ALAN Kelly has been appointed Golf Operations Manager at Moyvalley Hotel and Golf Resort the Hotel has announced today.

Kelly takes up the role at the north Kildare resort after a twenty-year career with the Golfing Union of Ireland and Golf Ireland where he was manager of the National Golf Academy from when it opened in 2006. 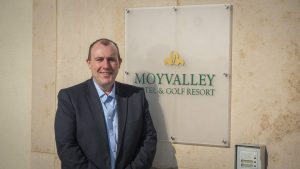 “I am thrilled to be taking on this role and I am genuinely excited by the opportunity that presents itself at Moyvalley” Kelly said. “There is a growing and active membership which is great to see and there have been major course improvements over the last year” Kelly said on his appointment.

The work carried out includes the reshaping of some water features, enhanced drainage and improved line of sight from the par-five sixth tee. This follows on from the reduction in the number of bunkers on the course which was completed in 2019. Extensive sanding has taken place on the fairways ahead of members returning next week while an enhanced greens maintenance programme will improve the already quality surfaces.

“From what I’ve seen significant resources have gone into improving the golf course, especially over the last few months and we can’t wait to show it off to members and visitors when restrictions permit. It’s a world-class golf course with an extensive short-game practice area and driving range, Moyvalley really has a bright future ahead” Kelly said.

Speaking about Kelly’s appointment, Simon Mooney General Manager of the resort said: “We are delighted to welcome Alan to Moyvalley. Having someone with his knowledge and experience of golf in Ireland will be an asset to us going forward and we wish him well in his new role directing and managing our golf activity”.

Kelly (41) was a senior member of the management team in the GUI, working on major projects such as the World Amateur Team Championships in 2018, the One Governing Body proposal to establish Golf Ireland and the European Amateur Championship in 2012. His voice will be recognisable to many as host of the GUI Podcast and GUI video content.

Moyvalley has hosted European Challenge Tour events in the past and staged the Irish PGA Championship in 2016 when Damien McGrane was victorious and in 2017 when Tim Rice claimed the title. The Darren Clarke designed course also played host to the Dubai Duty Free Irish Open qualifier in 2019 when Brian Casey earned his place in the field at Lahinch.

Open Champion Shane Lowry is also a winner at Moyvalley, claiming the first ever Darren Clarke Foundation event for under 18 boys in 2006 where he shot rounds of 72, 72 for a 144 total.