Kildare Face Either Offaly or Louth In Leinster Championship

THE Draw for the 2021 Leinster SFC was made live on RTE Radio 1 this morning and it sees Kildare facing either Offaly or Louth in the Quarter Final.

Kildare, of course, faced Offaly at the same stage last year and were put to the pin of their collar to defeat John Maughan’s side before crashing out against Meath in the Leinster Semi-Final. Of course Offaly have that tricky assignment in facing Louth who are now managed by Tyrone All Ireland winning manager, Mickey Harte. 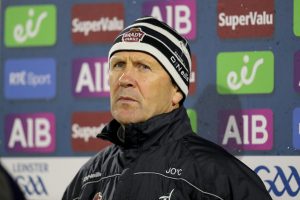 Nothing foregone for the Lilywhites no matter who comes through to face them in the Quarter Final. Could this be a home game for Kildare? Leinster Chairman, Pat Teehan, remained tightlipped on venues other than to confirm that Dublin’s Quarter Final will be played at a neutral venue.

Speaking of those same Dubs, who are going for their 11th Leinster title in a row, they will face either Wicklow or Wexford in their Quarter Final. Kildare’s Davy Burke will fancy his Wicklow charges against their South East neighbours as they defeated them in the Allianz League and Championship on consecutive weekends last November before coming a cropper against Meath in the Quarter Final.

Meath, themselves, will face the winners of Carlow and Longford in their Quarter Final. Niall Carew’s Carlow lost out to Offaly last year but he only had two matches to get them ready for that Faithful County clash. The Kildare man is sure to have them fired up to face a very competitive Longford side who lost out to Laois at Quarter Final stage in 2020.

The final Quarter Final game in this year’s Leinster SFC will see Laois play Westmeath in a midlands derby. Westmeath lost to Dublin at the same stage last year while Laois were ousted by the Dubs in the Semi-Final.

The Draws for the Semi-Finals will be made once the Quarter Finals are played.

In the Draw for the Leinster SHC it’s looking like a Kilkenny/Galway Final with Brian Cody’s men taking on Wexford or Laois  while the Westerners will face the winners of Dublin and Antrim in the other Semi-Final.