Henry de Bromhead on Punchestown, Schooling and his Successful 2021

SUCCESSFUL Waterford trainer, Henry de Bromhead, met the media on Tuesday at a Webinar event organised by Horse Racing Ireland (HRI) and he reflected on his successful year to date and looked forward to the 2021 Punchestown Festival which starts on Tuesday 27 April. 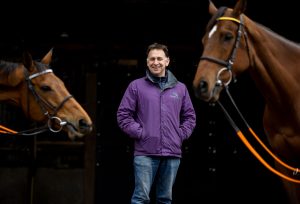 Reflecting on his hattrick of big race wins at Cheltenham and the winning of the Aintree Grand National, the genial de Bromhead said, ” It’s definitely all a bit surreal. I was just getting my head around Cheltenham and then to go and win the Grand National and even saying that seems ridiculous. These are the races you grow up watching and dreaming of having runners in and then to go and win them, I’ve run out of superlatives to describe it.”

He said that while he watched the Aintree race back a couple times he hasn’t had time as yet to savour it all. “It’s such a busy time of year now, we’re flat out but hopefully in May, when things calm down a little after Punchestown, we’ll be able to savour it a bit more.”

On the reason for such success in 2021 Henry de Bromhead sees it as a combination of a lot of different things. “No one is more surprised than I am. Everyone gets a run and it’s incredible that ours in happening now. We’ve been building for years, always developing, and we’re surrounded by a brilliant team here with loads of experience. Heather would have a huge influence as well. Then we have a great team of owners who have the confidence and faith in us to deliver for them with brilliant jockeys.”

He described a little bit more his schooling methods which have brought this unbelievable success. “I remember going to Tom Costello’s years ago, who had sold seven Gold Cup winners including Best Mate and many others, and I read Henrietta Knight’s book and how she used to loose school her horses. I also used to work with Demi O’Byrne and he used to loose school all his jumpers so it was something I’d seen a few times,” de Bromhead explained.

“I was at Tom Costello’s to buy a few horses and I walked into this barn and I saw these horses jumping without anyone pushing them along or hunting them along. So we built our own shed.  Basically the horses just get to jump loads of fences by themselves and learn to work it out and some just love it and it becomes fun for them really.”

Looking forward to Punchestown and Wednesday’s Ladbrokes Gold Cup the Waterford trainer said his Cheltenham Gold Cup winner, Minella Indo,  was in good form for the race. “He’s so laid back but we backed off him for a few days (after Cheltenham) and he got a bit chubby straight away so we started back with him again. He seems in great form. He was on the beach this morning and loved it so I’m happy with him.”

On the question of the Cheltenham/Punchestown double de Bromhead said, “Anything is possible with him, he seems to have taken Cheltenham really well but one concern would possibly be that he has had quite a few runs this year. After the season was shortened last year we said we’d keep him busy up till Christmas so that would be a concern. It’s nearly his 6th run (he fell after about a mile at Leopardstown) but he’s certainly not telling us anything like that, he’s in great form.”

de Bromhead also confirmed that Jack Kennedy would continue the ride on Minella Indo, if he is available. “He got a great tune out of him at Cheltenham.”

Responding to a question from the Kildare Nationalist on the success of former Irish Point to Point horses, which had been highlighted by our columnist, Niall “Slippers” Madden, Henry de Bromhead said, “The Irish Point to Points are getting more competitive with fantastic trainers preparing young horses for them. We have had great success out of them and at the moment I can only see it getting stronger and stronger It’s great to have the Point to Pointing back;  it’s a massive industry in itself. Since it restarted there’s been a lot of trading going on and we’ve been able to buy a couple of horses that have won already and I’d be a massive fan of it.”

Speaking of what Punchestown means to him, de Bromhead said, “Punchestown is one of the biggest festivals in the country. You would always be aiming towards Punchestown in the Spring. It’s brilliant to have a winner at Punchestown.”

Talking on the same HRI Webinar, Shona Dreaper, PR and Communications Manager at Punchestown, said that the going was good to yielding on the track at the moment. “We are watering and will continue to water so that we deliver ground that is on the slow side of good as the forecast is pretty settled.”

She also confirmed that the Festival is fully sponsored. “We are fully sponsored with 40 commercial sponsors which is a fair feat in the year that was in it. Our slogan is “Bringing our home straight through to your home”.”

We’ll have more from Henry de Bromhead on Punchestown 2021 on Thursday including his thoughts on the clash of Envoi Allen and Monkfish on Tuesday’s Opening Day.