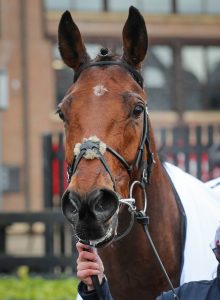 “He(Envoi Allen) is in great form and he worked really well the other day at the Curragh and we are very happy with him. Obviously he was unfortunate at Cheltenham but he seems in great form.”

Referring to the fact that he had only got the horse a few weeks before Cheltenham de Bromhead confirmed that they had gotten to know the horse a little bit better in the intervening weeks. “I think we have, yeah, and he’s much more settled. Even schooling him the other morning he jumped really well so we’re happy with him.

With the favourite and second favourite for the 2020 Cheltenham Gold Cup taking each other on at Punchestown de Bromhead outlined the respect he had for Monkfish.

“Of course you would have to be impressed with him. He’s been impressive all year. Maybe his least impressive performance was in Cheltenham but prior to that he’s been unreal. All these top horses taking each other on is fantastic for racing.”

The Waterford trainer has yet to decide who will partner Envoi Allen at Punchestown on Tuesday. He did, however, confirm that Put the Kettle on would go in Sandown on Saturday rather than Punchestown and that following the disappointment at Aintree Notebook had finished for the season after he scoped badly after the Liverpool race.

The 2021 Punchestown Festival commences on Tuesday next, 27 April and runs until Saturday, 1 May.

Don’t forget, Niall “Slippers” Madden will mark your card for all the big Punchestown Festival races in next week’s Kildare Nationalist, out on Tuesday.