Punchestown….But Not As We Know Ya

WE went to Punchestown yesterday. Yep the Kildare Nationalist was represented at Day 1 of the 2021 Racing Festival. Welcomed with open arms too. 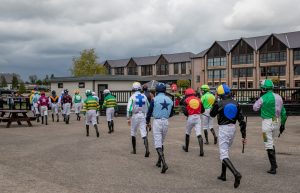 Hi Ho, It’s off to work we go! The jockey’s enter the Parade Ring for the First Race of Punchestown Festival 2021 Photo: INPHO/ Morgan Treacy

Accreditation was granted on Monday, the last day of the Irish summer. All well organised on-line too. The Health Screening Protocols organised professionally by Dr Jennifer Pugh and her Medical Team at the IHRB and the accreditation issued with equal alacrity by Barbara White and her team in the HRI.

Off we went then on the Tuesday. Typical Punchestown weather after Monday’s summer’s day. Cool, very cool at times, raining, nasty showers at times, oh and a bit of sunshine to confuse us along the way.

Met at the gates by two friendly Security Men; HRI or HSE? HRI today, HSE on Thursday, thankfully! On up the driveway. No queues of cars, no lines of cars in the carparks. No problem parking, although there never is any problem parking there such is the vastness of the complex.

Inside and we are met by three stations. Station 1, name check, fire away. Station 2, Check your Barcode, all systems go. Station 3, Wristband and a two page Race Card. And out into the open we go.

Then it hits us! The vastness of it all, the emptiness of it all, the maskness of it all. No crowds. No ladies in their finery, shivering in the April cold with goosepimples. No lads giddy at attending their first race meeting in their fancy caps, dressed liked something out of Richie Whelan’s window. No heaving Corporate Boxes and Stands. Nothing!

Just the sound of horses hooves echoing through the old and new buildings and complexes in Kildare’s iconic location that is the centre of the racing world for a week in April.

Yes we had plenty of horses and jockeys and trainers, just doing their job as they have done it so well, at home and abroad, since racing returned last autumn.

We met and spoke with Conor O’Neill, the CEO of Punchestown, who was overseeing his first Festival under lockdown. He was happy that everything was in order but already looking forward to 2022 and an open Festival again with more English visitors. If only they could win a race on the tract!

Shona Draper, PR and Communications Manager at Punchestown, was busy doing what she does best, crowds or no crowds. Dick O’Sullivan, former CEO and now President, was deep in conversation with Darragh O Conchuir, formally of this parish, who is doing well as a contributor to TG4’s racing coverage at the moment.

Punchestown Chairman, David Mongey was his usual affable self too.

Bernard Caldwell, CEO of the Stable Staff Association, was there, keeping an eye on all his people and greeting everyone in his usual wont. Gosh he seems to know everybody and everybody seems to know him!

The jockey’s busied themselves from the Weigh Room to the Parade Ring to the Race Track and back, some lucky, some not so, some tense looking , some looking relaxed but all their doing their jobs to the best of their ability, or their respective horses’ ability to be more exact. Paul Townend was limping badly from his recent injury; Rachel looked determined; Patrick Mullins looked relaxed. Henry Skelton, the English Champion jockey, was there too to ride Nube Negre, without success.

The booming voice of Brian Gleeson could be heard close to the Parade Ring as he kept RTE viewers up to date on horses, riders and the betting. High up in the empty stand Hugh Cahill was taking Ruby Walsh, Davy Russell and Jane Mangan through their paces on behalf of the TV viewers. Speaking of the Walsh’s Ted was there, busy with a horse or two, and Katie and Thousand Stars, formerly owned by Clane’s Hammer and Trowel Syndicate, walked majestically around the course. That is the combination that each jockey wants to meet at the end of each race!

Trainer’s aplenty: Mouse Morris, Shark Hanlon, probably dreaming of Skyace, the very successful Henry de Bromhead, Moone’s Jessica Harrington and Willie. Yes Willie Mullins was there in his usual green coat, hat and gloves. The Master of Closutton was the Master of Punchestown on Day 1 winning five of the races including the three Grade 1’s with Echoes In Rain, Chacun Pour Soi and the mare Colreevy.

Kildare Nationalist’s columnist, Niall “Slippers” Madden tipped the first two to win and talked up the chances of the mare in this week’s paper. Good man Slippers.

The racing was top class, the competition was fierce. All that was missing was the crowd. No priests on Priests Hill, no corporates in the boxes, no crowds in the stands. Punchestown is eerie this week!

More great racing for the rest of the week and let’s then all look forward  to 2022 and Punchestown ….A Festival of a Different Class!