In this week’s Kildare Nationalist Sport in the Kildare Nationalist, in your shops now, we carry a feature interview with Sean Hall, CEO Manguard Plus, who have an extensive sports, charity and schools sponsorship, particularly in Kildare but also extending into Dublin with the likes of St Patrick’s Athletic.

OFFALY may have its Shane Lowry but Kildare GAA in particular and other sports and charities in Kildare and Dublin are fortunate to have a benefactor in Sean Hall of Manguard Plus. A non-playing Ryder Cup captain maybe. 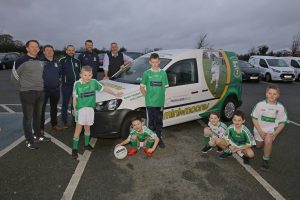 As well as being the main sponsor of Moorfield GAA club, Manguard Plus are the title sponsors of the Kildare GAA Centre of Excellence in Hawkfield and the minor football championships. In addition Sean Hall’s company also supports or has supported the likes of Suncroft, Carbury, Kildare Underage ladies teams, Newbridge Town and Newbridge United, Newbridge Hockey, St Patrick’s Athletic, Newbridge schools as well as such charities as the Father Peter McVerry Trust, Barrettstown, Meals on Wheels Newbridge and St Vincent de Paul. 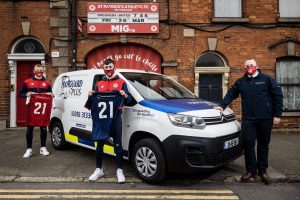 Darren Hall, Sean’s son, at the announcement of the sponsorship with St Patrick’s Athletic Photo courtesy Get it Across PR and Communications

His latest venture will be to support the new soccer club, St Patrick’s Well FC who we will feature in these pages in the coming weeks.

Sean Hall was born in Laois to a Kildare father and a Laois mother but moved to Newbridge when he was 10 after his Dad, who actually cycled with the likes of Paddy Flanagan for Kildare, got a job in Irish Ropes.

“That’s why the colours of the company are blue and white to reflect the Laois and Kildare colours,” Sean Hall told us after we caught up with him last week.

As well as full time work in the likes of McLoughlin’s Garage and Clover Meats the young Sean Hall was doing “door work” from he was about 18 or 19 years of age. In September 1996 he started his own Security Firm and after a slow start he started to get some contracts, including Aer Lingus in 1999, and they still have them today. That company, Cill Dara Security Services, evolved into Manguard Plus in 2008 with it’s Headquarters in Newbridge and other offices in Dublin, Waterford, Cork, Derry and Belfast, on the island of Ireland, as well as two offices in London and one in Chester in the UK with a turnover of €32/33m and a staff of about 1,400.

“Every penny we make goes back in to this country,” Sean Hall says, “ and everything we purchase we try to purchase in Ireland, if it is available here, so we try to give back to our own community as much as we can.”

Sean Hall says he played a “small bit of football” when he was young and his brother, Michael, played for Moorefield and he had a lot of friends at the club. “Then my son, Robert and daughter, Diane, went and played for Moorefield, then Darren and Alana followed them there. Adam Tyrell is my nephew.”

“My youngest son, also named Sean, played there from he was five or six but he always wanted to be a goalkeeper, but he still plays for Moorefield and also for the Academy at St Patrick’s Athletic in Dublin. Sean was in Newbridge Town for a while, then he moved to Crumlin United and he’s with St Pat’s for two years now playing for the U14 Underage National League Squad.”

“Our first sponsorship started with Moorefield in 1996/97 when we gave them a set of jerseys, which was the level of sponsorship at the time,” Sean Hall explains of his first involvement in sponsorship with his local club. “We then took over the Mini Moores about ten years ago and we sponsored everything from when they entered the Academy until the age of 16. We also sponsored a lot of local schools in the area during that time. Two years ago we took the full sponsorship of Moorefield.”

Not content with financially supporting Moorefield, Sean Hall became a coach at the club about 10 years ago also.

Sponsorship of clubs probably got Manguard Plus noticed at county level in Kildare and for the past three years they are the title sponsors of the Kildare GAA Centre of Excellence in Hawkfield. “That sponsorship is working out well for us. We try and devote 1% of our gross margin to Corporate and Social Responsibility and that’s a big thing for us,” Sean Hall explains.

“I am big into sport for kids and that’s my passion. Sometimes when kids break away from sport they don’t always go down the right road because they have lost the focus that sport provides. It’s good for their mental health, their well being, their fitness and they have opportunities of making friends for life like my kids have.”

“To be honest I don’t care if a kid plays for Moorefield or Sarsfields, and I don’t care what sport they play it’s wherever he or she is comfortable with. At Moorefield we encourage kids to play other sports but not to burn themselves out by the time they are 15 or 16 years of age,” he goes on to explain. “You want kids involved in as much sport as possible as each sport compliments the other.”

Sean Hall is a great believer in coaches attaining qualifications. “I can only speak for Moorefield but I know everybody at the club has to have their coaching done and most of us have done Level 1 and 2 and you learn a lot sitting in with the people who have played at the highest level.”

The Manguard Plus CEO is also a great advocate of everyone being given an opportunity to play. “You can’t leave a kid sitting on the sideline and not allowed to play, it’s not right. You have to have that vision that says it’s not about winning rather it’s about bringing the players on, improving their fitness, their skill levels. Players who were brilliant footballers at 13 or 14 are not necessarily brilliant footballers at 17 or 18 and the fella who was no good as a young player could be the captain of the club when he is 19.”

“ For too long kids were left sitting on a sideline and the focus was about winning. I’m talking about Moorefield again but our focus is not to win, its to keep kids playing football for as long as we can.”

“Because I have been up at League of Ireland for the last two years now with Sean and I see how professional it is there with full time coaches, physios, food plans so that’s what we need to do in the GAA, that’s the level we need to get to,” Sean Hall contends.

“We have a good Management Team here at Manguard Plus and they have other interests so it’s not all down to what I want. We made a decision two years ago not to send out Christmas Cards or to buy presents so instead we decided to give donations to charities,” the CEO explains, “and I think we doubled those donations last year because of the year that was in it.”

“We are a company that is designed never to be sold, it is a very lifestyle company. Yes, I want the company to continue to grow and I want all the people within the company to grow with it. I wouldn’t like it to get too big though, I want it to be where I can always manage it,” Sean Hall further explains.

“It’s a company that’s here for everybody that’s in the company. We have a big emphasis on the staff and in the value of our staff. I’m a real believer in the saying you get back what you give. I never ask anyone to do what I wouldn’t do myself. I have a big family involvement in the club and it is literally a family focused club.”

“I’d love to see us winning a Leinster again but that’s going to be hard with Dublin in the province. There is a huge commitment in playing for the county and holding down a job but Dublin seemed to be able to manage that much better. We are going to have to get to that level but I don’t know how we are going to do that.”

“Johnny Doyle and the lads are working with the kids and bringing them along, trying to get them to play a particular style and then maturing into the county side. We need to be patient when these young players come in. Our expectations are probably too much sometimes. We all want to win Leinsters and we all want to win All Irelands but we will all have to be patient and wait,” Sean Hall concludes.

Filed under: Get it Across Pr and Communications, Kildare GAA, Manguard Plus, Moorefield GAA, St Patricks Athletic